North Korea, which threatens to unleash the war against the United States and its allies, probably prepares several new nuclear explosions. Two or three nuclear objects may appear in the north-west of North Korea, where the previous nuclear test was carried out, South Korean Yonhap news agency reported with reference to intelligence sources. 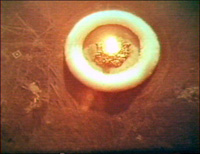 For the time being, there is no evidence to prove that the nation is working on a new explosion, sources say. Official spokespeople for US special services said that North Korea intended to respond with a third nuclear blast to UN’s new sanctions. Pyongyang conducted its second nuclear test on May 25, which made the UN Security Council toughen sanctions against the country on June 12.

South Korea and the United States intensified their satellite observation of eleven suspicious objects in North Korea. One of them came in USA’s view in 1998. US specialists obtained the right to examine the underground bunker in return to food assistance to the country. US inspectors visited the object in 1999, but found only empty tunnels there.

South Korean intelligence refused to comment the news about the possibility of new explosions. An intelligence officer told AFP on conditions of anonymity that special services were watching Pyongyang’s activities closely.

In the meantime, a source from the General Headquarters of the Russian Armed Forces told RIA Novosti news agency that North Korea reduced activity on its nuclear objects during the recent days.

“It may mean that North Korea has either prepared for a new explosion or paused their activities there,” the source said.

The US military rejected the accusations and said that the US Army withdrew nuclear arms from South Korea in 1991 after the end of the Cold War.

On Saturday, North Korea threatened to declare war on any country that would dare to inspect its vessels at sea (a new resolution from the UN Security Council allowed the measure). Later that day North Korea officially acknowledged that it was enriching uranium – the country previously reported about its plutonium program only.