A 24-year-old nurse of the intensive care unit of the Children’s Hospital of Russia ’s Novgorod created her page on a dating website. As she wrote, she wanted to meet a man between 21-40 years of age. She also uploaded several pictures of hers in an attempt to show what a loving and caring person she was. The woman posted photographs of her posing with preterm infants. 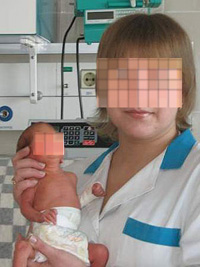 “I just wanted to show everyone that I love children,” the woman later said.

The “loving and caring” woman took immature babies out of their boxes where they were kept under special temperatures and leaned the helpless babies against her gown.

“What the nurse did is a violation of moral standards, it is also a violation of the rights of the babies and their parents,” the head physician of the Novgorod Children’s Hospital, Tatiana Kotova said.

The nurse said that the photos remained on her webpage for four days only. She decided to remove the pictures after she had spoken with her mother. However, it was too late: many of those people, who visited the woman’s page, made print screens of the photos and posted them on online discussion boards.

The nurse has been fired. Doctors said that she did not hurt the babies when she was making the photos. The woman said that she should not have made the photos and that she was sorry to leave the job at which she worked for four years.