Flight control officer Ilya Kurakulov will be put forward for a state decoration for preventing the midair collision of two passenger jetliners. 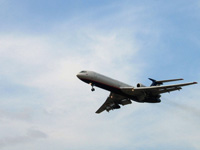 The incident in the sky above the Moscow region took place on April 24, but the details were exposed only yesterday (May 14). A Tu-154 jetliner took off from Moscow’s Vnukovo Airport bound for Samara and started gaining height. The pilot of the plane forgot to retract the landing gear of the aircraft. Another plane, a Boeing 767, was flying from Moscow to Vladivostok along the same air passage, albeit four kilometers lower. The Tupolev aircraft began to lose altitude because of the landing gear, while the Boeing was ascending quickly.

The Tu-154 was about to find itself spinning flat. It was about to nosedive into the Boeing. There were 300 passengers on board the two planes. None of them would have obviously survived in the crash.

The two liners were approaching each other for 15 seconds. The flight control officer noticed that the Tupolev was nose-diving into the Boeing and ordered the Tu-154 crew to stop descending. No reaction followed: the two planes were flying towards each other. Ilya Kurakulov instantly ordered the crew of the Boeing to stop gaining altitude. The two liners changed their flight directions only 30 seconds before the possible collision.

Ilya Kurakulov has appeared on many Russian news programs recently.

“I am very happy, of course, that the tragedy didn’t occur. I am proud to have done everything as a professional but this is my job,” the flight control officer said.

A special committee of the Russian Aviation Agency is currently investigating the incident, particularly the actions of the Tu-154 pilot. It is not ruled out that the pilot will be called into criminal account.