French businessman and his family die mysterious death in Moscow

The Moscow police are investigating the mysterious death of a French entrepreneur, his wife and daughter. The French family was most likely murdered by unidentified criminals, who subsequently set their home ablaze. 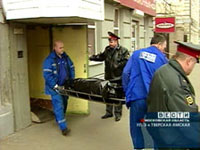 French businessman and his family die mysterious death in Moscow

The family of the French entrepreneur was most likely murdered in their apartment in the Moscow center, GZT website said. Firemen found the bodies as they were trying to extinguish the fire in the flat. The businessman’s three-year-old daughter died when rescuers were trying to take life-saving efforts.

The fire in the apartment broke out in the apartment owned by the commercial director of the Russian-French wine-making company, Chateau le Grand Vostock, Thierry Spinelli, his wife Olga, an employee of Simple Wine Club, and their daughter Elisa.

It took the fire squad over an hour to put the fire down. Forensic experts determined that the fire had been arranged intentionally to conceal the traces of the crime.

The police are searching for the housemaid of the slain family, as well as for a group of workers who were doing finishing works in the neighboring apartment, Interfax reports.

“The workers were gone immediately after the family had been murdered,” a police officer said.

The body of the businessman’s wife was found on the floor with her hands tied behind her back. Experts determined that the woman had been strangled. Spinelli’s cause of death has not been determined yet. The little girl was still alive when the fire crew arrived, but she subsequently died of carbon monoxide poisoning as rescuers were taking her out of the burning flat.

Spinelli always parked his black Mitsubishi Pajero near the apartment building. However, the vehicle disappeared on Sunday overnight.

The police also believe that the French businessman might have killed his wife and then self as a result of a family drama. The friends of the family say that this version is ridiculous because the man was madly in love with his wife and daughter and never had any fights with them.

Experts later found traces of violent death on the body of the French businessman too. It is not ruled out that the family was assassinated by their business competitors.

Spinelli’s Chateau le Grand Vostock organized its wine business on the outskirts of the town of Anapa in Russia’s south in 2003. It became the first full-cycle production of wine in Russia (from growing grapes to bottling wine).

The firm introduced its products on the Russian market in 2004. Spinelli’s products won recognition in the West when it conquered an international wine show in London. The company made 750,000 bottles of wine and then increased its production to one million bottles. The company is headquartered in Moscow.