Child chokes on tampons and dies during dental visit

The police of Samara are investigating the death of a three-year child, who died during a visit to the dentist. The incident took place at one of the dental clinics of the Sovetsky district of the city of Samara, RIA Novosti reports. 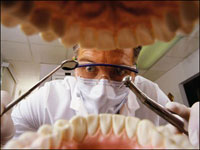 Child chokes on tampons and dies during dental visit

“The incident took place on March 26, when the child was sitting on the dental chair. The dentist removed a tooth, put two dental rolls in the child’s mouth, but the child swallowed them and choked on them,” a police officer said.

The doctor managed to take one of the rolls, but it was impossible to remove the other one. The roll was found in the child’s throat during the autopsy.

The police are not certain whether the dentist was guilty of the child’s death or not. The doctor did everything he could to save the child’s life. Nevertheless, the dentist did not make any mistake in the treatment, nor did he neglect his patient during the process.

A similar accident took place in a dental clinic in Russia’s Saratov region several months ago. A girl, born in 2004, swallowed a dental file during the root canal treatment. However, the child was urgently hospitalized, and the tool was successfully removed from her stomach.