According to the statements by Greek Mercantile Marine Ministry and Norwegian Shipowners' Association two Russians are staying on board the Greek and Norwegian cargo vessels captured by pirates in Somalia. Russian Ministry of Foreign Affairs did not confirm this information and said that the issue is under the investigation now. 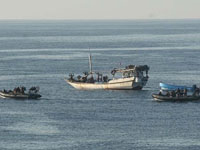 The Nipayia vessel was captured by the pirates about 720 kilometers off Somalia on Wednesday. A spokesman for the Greek Mercantile Marine Ministry said the crew comprised one Russian national and 18 Filipinos.

The Norwegian-owned tanker Bow Asir was seized 400 kilometers off the Somali coast on Thursday morning. A spokesman for the Norwegian Shipowners' Association said the ship's captain was Russian. A total of 27 people are on board the vessel.

Around 20 warships from the navies of at least a dozen countries are involved in anti-piracy operations off Somalia, which has been ravaged by years of civil war. According to the United Nations, Somali pirates carried out at least 120 attacks on ships in 2008, resulting in combined ransom payouts of around $150 million, RIA-Novosti reports.

Both vessels are chemical tankers but their cargoes were not immediately made public.

A Nairobi-based diplomat said the Nipayia had 18 Filipinos on board and a Russian captain. He said the ship is managed by Athens-based Lotus Shipping, speaking on condition of anonymity because he was not authorized to speak to the press.

The owner of the Norwegian Bow Asir, Salhus Shipping AS, said it received a security alert message from the Bow Asir at 0729GMT saying the ship was being chased by two small boats with suspected pirates on board.

At 0745GMT, the captain reported that the pirates had boarded the vessel, and three hours later, Salhus Shipping received an e-mail from the ship confirming that 16 to 18 pirates carrying machine guns had gained control, managing director Per H. Hansen said in a statement.

"We have no reports of any injuries," he said. "We are doing our utmost to ensure the safety of the crew, and have established communication lines with naval forces, insurance companies, flag state and charterer."

NATO announced Thursday that its anti-piracy flotilla of five ships was resuming patrols off the Horn of Africa, joining an international squadron already operating in the region.

The flotilla will join at least 20 warships from the EU, the U.S., China, Russia and other navies are patrolling the region in an effort to prevent pirate attacks on the sea lanes around the Horn of Africa.

An earlier NATO mission — sent to the region in October in response to appeals by the United Nations — was replaced in December by an EU flotilla. Its main task is to escort cargo ships chartered by the U.N. World Food Program carrying humanitarian aid to Somalia, which has been without a functioning government since 1991.

Naval officers say controlling an ocean area the size of Western Europe is difficult, even with the help of ships' helicopters and maritime reconnaissance aircraft, the AP reports.

Pirate attacks off the Somali coastline hit unprecedented levels in 2008. The pirates made 111 attacks and seized 42 vessels, mostly in the Gulf of Aden last year. Seven have been seized so far this year, although there were roughly 10 times as many attacks in January and February 2009 as there was over the same period last year. There have been almost daily attacks in March, including an incident in which a Korean sailor received a bullet wound in the head.