Fourteen people were killed in a large car accident on the outskirts of the town of Petushki, the Vladimir region of Russia, EMERCOM said. 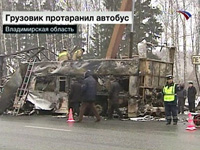 A passenger bus slammed into a KamAZ truck on Thursday night at 1:20 a.m. Moscow time. The accident occurred on Moscow-Nizhni Novgorod-Ufa federal highway. The bus overturned and burst into flames, Itar-Tass reports.

There were 15 passengers and two drivers in the bus. The driver of the KamAz truck was killed too. All the people who died in the accident were residents of the city of Ulyanovsk.

“Four other people were injured. All of them are males. They have been hospitalized with serious injuries,” a source from the Russian EMERCOM said.

It took rescuers more than three hours to take the bodies out of the smashed bus, RIA Novosti reports.

The accident took place after the KamAZ truck went into the oncoming traffic and slammed into the bus at full speed.

“Investigators believe that the KamAZ truck driver fell asleep at the wheel. The part of the highway, where the accident took place, is straight and was illuminated very well,” the police said.

The passenger bus was traveling to Moscow.

The government of the Ulyanovsk region will render all necessary assistance to those who lost their relatives in the accident, an official spokesperson for the government said.