Russia’s Sverdlovsk region is mourning the victims of the recent tragedy, which took place on March 21 in the night club of the town of Pervouralsk. Three young women and a 30-year-old man were killed in stampede near the entrance door of the club. 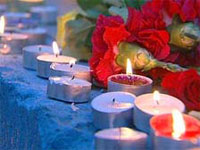 The funeral service was held near the apartment buildings, in which the three women (tenth-graders) and the man lived. Young people bring bouquets of flowers and candles to Kapella night club, where the incident happened. All entertaining events in the region have been canceled in connection with mourning.

Deputy Prosecutor General of Russia’s Ural region ordered all regional departments of the Interior Ministry to take all adequate measures to guarantee security during all public events of the region.

Three teenage schoolgirls were killed in stampede at the entrance door to Hollywood discotheque at the local entertainment center, Kapella. A 30-year-old security guard of the club was killed as he tried to save the three teenage girls after they had fallen down on the floor in the crowd. Stampede occurred after the administration of the club decided to cancel the entrance fee during the first 30 minutes. Eight other people were injured in the incident too.