A court of Russia’s Saratov region ruled to compensate an underage patient of a local dental clinic, whose health was damaged during her visit to the dentist. The incident took place on December 30, 2008. 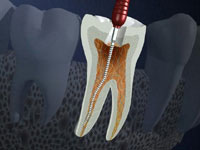 The patient, a five-year-old girl, swallowed a metal tool – a dental file – during the root canal treatment process. The child was hospitalized, and the tool was removed from her body. However, the girl developed posttraumatic gastritis because of the foreign body in her stomach.

A district court ruled that the dentist caused bodily and moral damage to the child. The clinic was ordered to pay the compensation of 30,000 rubles ($857) to the girl.

About 50,000 people die of medical mistakes in Russia every year. Child patients fall victims to such mistakes on a regular basis too.

A criminal case was filed into the death of an 18-month-old boy in Russia’s Khakasia Republic in January of this year. Doctors made a mistake in their diagnosis and did not provide the boy with the required medical aid, which eventually resulted in his death.

The head of the maternity department of a local hospital in Russia’s Tomsk region was charged with involuntary manslaughter of an infant, who suffered serious traumas at birth and died two days later.

A court of the city of Pyatigorsk is hearing a case against a surgeon of a local hospital. The surgeon unduly removed the appendix from a five-year-old boy, Yegor Shramkov, who subsequently died a month after the operation.

The case of Sonya Kulivets became Russia’s most notorious incidence of doctors’ negligence. Sonya was only two months old when she was hospitalized with whooping cough on December 31, 2006. The little girl had to have to her arm amputated after treatment.