Teacher sells marijuana to his students

According to official statistics there are about 3 million drug addicts in Russia. There are a lot of young people among them. However, the drug problem seems much more serious when drugs are sold to the youth by their teachers. 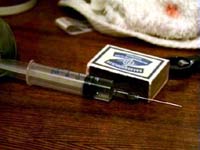 Teacher sells marijuana to his students

At the beginning of March a teacher from the Russian city of Penza was taken into custody for selling marijuana to his students at the technical college.

He was growing cannabis at his dacha and then was selling it to his students. At first he persuaded two of his students to try marijuana for free. Teenagers liked it. When some time later the teenagers asked him to give them some more the teacher demanded payment.

“The young people, as it often happens, tried drugs for the first time for free, but later the teacher started to sell them cannabis for 300 rubles ($10) per box and the students began to resell it to their friends” – says Elena Samorukova, Penza region police official.

One of the students was arrested by police and he told them everything about their drug cooperation. Now the teacher can be sentenced to 8 years in prison.

Up to 2.5 million Russians including 140,000 minors are addicted to illegal drugs, the head of the Federal Drug Control Service said.

"The overall number of drug addicts in our country is between 2 and 2.5 million people between the ages of 18 and 39," Viktor Ivanov said. "There are more than 140,000 minors registered in rehabilitation centers who are suffering from drug addiction."

According to Ivanov, around 30,000 individuals die annually from drug-related causes in Russia. He said that one of the major problems is heroin being trafficked out of Afghanistan through the "porous and unequipped border with Kazakhstan."

Ivanov said that after becoming addicted to illegal opiates, people live for an average of five to seven years. Causes of death can vary from contaminated drugs and needles to drug-related crimes, rian.ru reports

Some 38 tons of narcotic substances were confiscated in Russia by narcotics police in 2008, and approximately 7,000 drug gangs were detained, arrested or killed, according to Ivanov.