Iraqi officials confirm that security operations were carried out by national forces and not foreigners; 27% of the candidates in the first major election since 2005 were women and the Sunni population turned out in large numbers, compared with the 2% turnout in 2005. Good news? 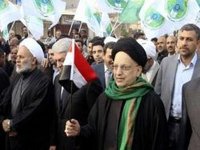 Not really. The fact that the country’s borders had to be closed, that a vehicle ban was necessary, along with a curfew, speaks volumes about the scenario surrounding the election process. Where else on Earth would it be necessary to implement such measures just to hold an election?

Good signs for the cosmetically convinced were the 27% rate for female candidates, the greater turnout among the Sunnis (over 60% compared with 2% in 2002) and the apparent move towards secular and nationalist political movements.

However, the former can also be construed as a sexist imposition from a foreign power. How come suddenly a third of candidates are women, and with what credentials? “Hey you’re a woman, wanna be a Member of Parliament?” (?). Another worrying detail was the high number of people unable to vote because they were not listed on the voter rolls. Why?

More people engaged can only be praised as a marker for democracy yet what is the future of this country? Only 14 out of the country’s 18 provinces voted, for a start (the three Kurdish provinces and Kirkuk did not vote). With the growing sensation that the invading military force is about to leave (it is after all a question of when and not if) it does not make sense for the freedom fighters to waste resources in actions which can be postponed until later.

Within a few years, Iraq will see a return to the type of chaos that saw Saddam Hussein al-Tikriti rise to power, backed by the USA, only this time around the new Saddam will not want any ties with Washington. Iraqi society has been destroyed, like the infra-structure of the country was devastated by American military hardware, before billionaire contracts were doled out to Bush regime cronies. The power base has changed.

The war crimes were committed, cluster bombs were deployed in civilian areas, a sovereign nation was attacked outside the auspices of international law. Such outrages are paid for, sooner or later. While there are good signals coming out of Iraq, how many of them are real, and how many virtual, due to the fact that there are so many elements and vectors waiting for the mass pull-out of invasion forces?