The Israeli air raids on the Gaza Strip represent severe and massive violations of international human rights such as defined in the Geneva Convention, regarding the obligations of the occupying power as for the demands of the laws of war. 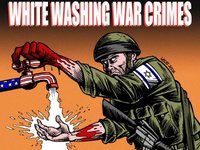 Collective punishment; all 1.5 million persons who live in the congested Gaza Strip are being punished by the actions of a few militants.

Targeting civilians - the air strikes were aimed at civilian areas in one of the most congested areas of land in the world, certainly the most densely populated area of the Middle East.

Disproportionate military response - the air strikes not only destroyed all the police and security facilities of the elected government of Gaza but also killed and injured hundreds of civilians, at least one confirmed attack hit groups of students who were trying to find transport from home to college.

The previous Israeli actions, specifically the complete sealing of entry and exit to and from the Gaza Strip has caused severe shortages of medical supplies and fuel (as well as food), resulting in the inability of ambulances to meet the wounded, the inability of hospitals to provide appropriate care or equipment needed for the wounded and the inability of doctors and other health workers in the besieged Gaza to treat the victims properly.

Certainly the attacks with rockets against civilian targets in Israel are illegal. But such illegality does not give Israel the right, does not justify as an occupying power or as a sovereign state, to violate international humanitarian law and commit war crimes against humanity as a response. I note that the escalation of the Israeli military assaults on civilians has not made Israelis more secure, like the one Israeli killed today after triggering the Israeli violence is the first in more than a year.

Israel also ignored the recent diplomatic initiatives to restore the Hamas truce or ceasefire since its expiration on 26 December.

The Israeli air strikes today, and the catastrophic human cost that resulted, confronts those countries that were and remain accomplices, both directly and indirectly, of the Israeli violations of international law. This complicity includes those countries consciously providing military equipment, including war planes and missiles used in these unlawful attacks, as well as those countries that supported and participated in the siege of Gaza which in itself has caused a humanitarian catastrophe.

A reminder to all Member States of the United Nations that the UN continues to be tied to an independent obligation to protect all civilians who are faced with massive violations of international humanitarian law - without mattering which country may be responsible for such violations. I appeal to all Member States, as well as responsible and relevant bodies of the United Nations system, to move forward on an emergency not only to condemn the serious violations of Israel but also to develop new approaches to provide real protection to the Palestinian people.

Special Spokesman for the Human Rights Council of the United Nations for the Occupied Palestinian Territories. Professor of Law Emeritus at Princeton University, USA.

Professor Richard Falk was on the 15th of December denied entry into Israel. He then was extradited by Israeli authorities to Switzerland.

Professor Richard Falk is a Jew...