US special services arrest Russia’s 'Merchant of Death' in Thailand

Viktor Bout, an arms dealer known as “The Merchant of Death,” was arrested in Thailand, at a Bangkok hotel. Special services from many countries of the world have been hunting for Bout for years. US officials believe that the Russian businessman is world’s largest arms trafficker. Hollywood apparently sticks to the same opinion: Nicolas Cage played a character similar to Bout in a 2005 film Lord of War. 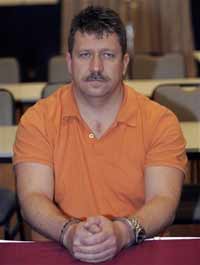 US special services arrest Russia’s 'Merchant of Death' in Thailand

Special units of the Thai police and representatives of US law-enforcement agencies arrested Viktor Bout in his hotel room.

US authorities accuse the Russian citizen of illegal arms deliveries to Africa in contravention of the international embargo. Bout has been supposedly shipping weapons to rebels in Angola, Congo, Liberia, Rwanda, Sierra-Leone and Sudan since the beginning of the 1990s. The dealer was selling Soviet-made weapons for diamonds. Western investigators believe that Bout has established a network of 50 airlines to transport his arms all over the world.

The British intelligence says that Bout delivered weapons to Afghan Talibs in the sum of $30 million and cooperated with them until September 11 attacks in the USA. In 2002 Bout was accused on his links with al-Qaida. An owner of a Kenyan diamond mine was arrested in Belgium in 2002. The man told the police that Bout coordinated his arms shipments to Afghanistan with al-Qaida leaders. Belgian authorities subsequently issued an arrest warrant for Bout and put him on the international wanted list.

Bout persistently rejected all accusations claiming that Western special services slandered his name to clear their reputation in Africa. In 2002 he said the following phrase to reporters: “I have never done anything in my life that would make me hide from anybody. It more looks like a Hollywood action film.”

In 2006 Washington blocked Viktor Bout’s assets in the USA. Bout was residing in Moscow at that time. Russia’s Office of the Prosecutor General did not see any reason to deliver the businessman to Interpol.

It is not known where he lived afterwards when he left Russia in 2006. However, his arrival in Bangkok on February 29 became a fatal mistake for him to make.

Russian law-enforcement agencies have not charged Viktor Bout with anything and are not going to send any extradition inquiries to Thailand.

The United States is seeking the extradition of the suspected Russian arms dealer, but he will remain in Thailand pending an investigation into whether he used the Southeast Asian nation as a base to negotiate arms deals. He faces up to 10 years in prison in Thailand if found guilty on charges of procuring weapons for terrorists, police Lt. Gen. Aidsorn Nontree told a news conference. Police believe he was planning to negotiate arms deals in Thailand, the AP reports.