Hashim Thaci is used to breaking the law, having presided over one of the most bloodthirsty monsters ever to have disgraced the Balkans, the feared Ushtria Clirimtare e Kosoves, or Kosovo Liberation Army, which, as he himself claimed, carried out deliberate acts of terrorism to provoke the Serbs into taking action. 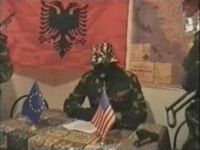 True to form, this murderer, this outlaw, this terrorist, now a self-styled politician, has had the audacity not only to flout the laws of the Republic of Yugoslavia, and then the laws of Serbia but now goes on to flout international law as well, in a ludicrous claim to independence in a territory which is, and always has been, a Province of Serbia.

Any recognition of Kosovo as an independent state by any other country amounts to a flagrant disrespect for international law, since the declaration has no legality whatsoever. Indeed, any member of the international community which recognizes Kosovo is in this act giving the nod to the formation of a rogue state, a pariah, run by the Albanian mafia.

Any act of recognition of Kosovo is giving the nod to the heinous crimes perpetrated by the gang of international criminals which hid behind the KLA as they carried out shocking acts of mass murder, destruction of property, and masterminded acts of sexual slavery, drugs running and arms trafficking.

Any state which recognises these criminals as a Government and this, the Serbian heartland, as an independent country, without the blessing of a UN Security Council resolution, will be breaching international law and as therefore, any such decision will render the Governments of such countries as being guilty of association with criminals.

The history of international diplomacy has, since the Treaty of Westphalia in 1648, been trying to establish norms whereby the existing frontiers of sovereign nations are respected. UN Resolution 1244 recognises the fact that Kosovo is an integral part of Serbia and since the United Nations is the only proper forum of international law with the jurisdiction to determine the status of territories, both this declaration, and any act of recognition, constitutes a breach.

That any country which deems itself a state of law and which claims to recognise the need to respect due process can contemplate recognising this band of criminals as a State is as predicatable as it is shocking in today’s world.

Recognition of Kosovo is an admission that the rule of law, the notion of binding agreements and the precept of common decency all belong to the past. Evil has won over Good. The Devil has beaten God. Many of the world’s richest and most powerful nations are about to launch a dangerous precedent which basically tears up any treaty, flouts any norm and dessecrates the graves of the thousands of men and women who toiled tirelessly for centuries so that the international community could be set upon the foundations of legality.