Today, the Kremlin chimes are the only ancient mechanical tower clock in Russia and worldwide

In Russia, a new year begins after the old Kremlin tower chimes strike twelve on December 31. The clock is situated in the very heart of Moscow, the Red Square, that is known as the favorite place of interest among foreign and Russian guests of the capital. In 2005, the old clock turned 600. 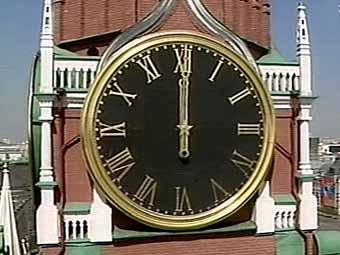 The old clock is situated in the Spasskaya Tower of the Kremlin at the height of about 60 meters. One has to climb a cast-iron tracery staircase with cast footsteps to get to the clock. People who maintain technical support and secure the clock have to climb the long staircase several times a day.

Head of the group for the Kremlin chimes restoration, Alexander Starodubov, is an accurate Time Keeper. This is the name under which the man is known in the Kremlin. He has to examine parts of the chimes regularly and lubricate them with machine oil. The Time Keeper says that he adjusts the clock twice a day because the chimes go five-six seconds fast every 24 hours.

One who manages to climb the staircase and reach the rarity clock mechanism on the eighth circle of the Spasskaya Tower risks to remain thunderstruck when the chimes begin to sound. Everyone who wants to have an excursion about the Kremlin clock needs to have earplugs. The very heart of the Kremlin clock consists of perpetually moving pinions, levers and other clock mechanisms. Today, the Kremlin chimes are the only ancient mechanical tower clock in Russia and worldwide.

In previous centuries only emperors and their confidants were allowed to come inside the Kremlin clock. Sometimes, foreign ambassadors were permitted to come and see the wonderful clock from the inside. Today, the main clock of the country is guarded as a strategic object. It is not open for public excursions.

Nobody knows how much exactly the mechanical wonder weighs. It is not easy to know absolutely everything about the huge construction. The Kremlin chimes are the national standard time for the whole of Russia.

The musical chime is what makes common tower clock particular. Some time ago, there were over 30 of working bells while there are just 14 bells there today. It was just once over the modern history of Russia that the bells kept silent. In 1974, the bells did not ring for 100 days, two hours and 58 minutes because of complex restoration of the clock.

The belfry is situated some circles above the heart of the clock. Some unique bells even have the brands of makers who moulded them. One bell weighing 21 poods (one old Russian pood equals 16.3 kg) has an engraving saying it was made in 1769 and mentions the name of the maker. Best bell ringers of the Moscow Patriarchy put the Kremlin bells' ringing right. These bells have small hammers instead of tongues to make the sound short and resonant. It slightly resembles the organ sound with its polyphony. People must not stay for too long under the hipped roof of the tower otherwise they may have headache. There is a legend saying that some members of the imperator family even lost conscience staying there. Probably it happened because of fear caused by another legend saying that ghosts haunted the Spasskaya Tower. Today, guards of the chimes say they from time to time feel uncomfortable staying in the tower as if someone is watching them.

In 2004, the Kremlin chimes turned 600. Monk Lazar Serbin from Afon made the first clock mechanism and mounted it in the Moscow Kremlin in December 1404. Today's chimes were made under Peter the Great. But the original sight of the chimes was transformed several times within the centuries. Parts of the clock were changed three times within the 20th century.

Igor Ganswindr from the Russian Academy of Sciences Center for Geoinformation says the tower clock made by Monk Lazar survived many fires and restorations. It was mysteriously discovered a year ago. In 1624, some merchants from Yaroslavl bought a clock that served its time on the Spasskaya Tower and restored it. It became a real scientific sensation when researchers supposed that the chimes of the Spassky monastery in Yaroslavl were probably the rarity clock made in the epoch when Monk Lazar lived. However, this fact is not yet determined for certain.

In 1917, Bolsheviks changed the czar melody of the chimes for The Internationale and a revolutionary song popular at that time. In 15 years, the chimes sounded only The Internationale. In 1938, the Kremlin clock sounded no music at all and only rang chimes to mark every hour.

In 1995, the authorities charged experts with reviving the melodious sound of the main clock of Russia and making it sound two melodies as it had been in previous years. So, experts of the clock industry research institute performed a unique job. At first, they recorded the chimes of the bells remaining on the Spasskaya Tower to determine the musical tone of each bell. Then they made the frequency analysis of the bell sound. The sound of the chimes was restored in 1996. Today, the Kremlin bells sound two melodies; Russia's national anthem composed by Alexandrov is one of the two.

During the last restoration of the clock the face and the hands were covered with special protective substance to resist the soot and gases of the megapolis.