This season several of Russia’s richest people have purchased new yachts, or simply 'boats' as Russian billionaires call heir luxury yachts worth hundreds of millions of dollars, the newspaper Izvestia reports. Roman Abramovich, Alisher Usmanov, Mikhail Prokhorov and Vladimir Potanin will soon have their private fleets renovated. Some of them need yachts for high society parties, others use them for sports. In any case, all yachts no matter what they are meant for are incredibly expensive. 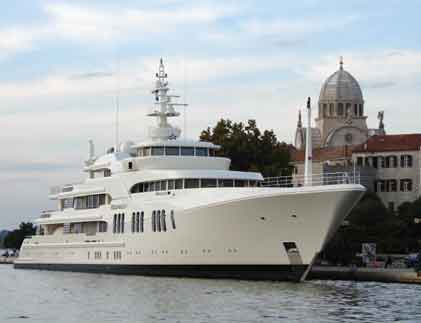 Russian oligarchs are cherished on the world market of yacht makers most. But at the same time, yacht makers add that Russians are very special clients. Manager of one of Europe’s biggest yacht broker, Ancasta, Nick Griffiths told Izvestia that Russian clients want to have yachts longer than anyone has; they want their masts to be the highest and their decor most sophisticated. Having a private luxury yachts emphasizes the high status of a person in Russia. Russian oligarchs are often preoccupied with intricate design and numerous options of their boats, paying less priority to the purpose of their use.

Yacht experts of the world came to a yacht festival in Moscow last weekend. Unfortunately, they had no opportunity to see the yachts Russian oligarchs have recently bought as the new vessels were furrowing the seas far away from Moscow.

Manufacturing Director of Laky Verf Oleg Kondruk tells that Russians in fact reveal a more delicate taste than is usually believed. Usually, Arab clients who have too much money order luxurious decoration of their vessels to produce a tremendous effect. Experts also add that if Russian clients happen to order bigger than usual yachts they do it for some practical purposes.

Chukotka Governor Roman Abramovich is a real connoisseur of yachts and yachting. He owns three yachts: Sussurro (161 feet), Ecstasea (282 feet) and Pelorus (377 feet) that are not mere yachts but cruise vessels according to the international law. Recently, Abramovich has ordered a new yacht for $300 million at the German shipyard Blohm & Voss.

It is known that Roman Abramovich now finances building of another super-yacht Eclipse that will be supplied with a real submarine, helipads and a missile recognition system (but it is not for sure that the yacht will have it, experts state). The Chukotka governor needs the new yacht to keep his reputation at a proper level and also to organize parties for business partners, the elite and players of the football club Chelsea that he owns. So, it is quite natural that the oligarch wants a bigger yacht for this purpose. The new yacht Eclipse will be about 160 meters long which is 1.5 times bigger than a football ground. None of yacht owners in Russia and other countries has such a huge yacht.

However, western mass media inform that an unnamed Russian has ordered a bigger vessel with seven decks at the Italian shipyard Fincantieri (during the construction process the yacht is called Hull 6154). This gorgeous yacht will also have helipads and a tank meant for keeping a submarine, everything that the new yacht of Abramovich has. But there is information that this new vessel will be more magnificent with bathrooms decorated with gold and marble, Jacuzzi and a gym with windows facing the sea on all sides. Unfortunately, the Italian shipyard has win the reputation of a manufacturer producing low-quality vessels which is the cause of a lawsuit between a client and the shipyard at present, managers of Russian yacht brokers state.

It is for sure that Hull 6154 will be the most technically advanced vessel of its class. It will be shorter than Eclipse of Abramovich and make up 134 meters, and cost less than the Chukotka governor plans to pay for his gorgeous yacht – just $270 million. What is more, Hull 6154 that isbeing manufactured at a shipyard in Genoa will be finished by 2010 while Eclipse is to be launched very soon. Fincantieri would not comment upon the name of its rich client who has ordered such an expensive vessel. Experts believe this client is one of the Forbes billionaire list whose income is made public.

It is known that almost all of Russians billionaires already have yachts of their own. Owner of the NAFTA-Moskva oil company Suleiman Kerimov has a 90-meter yacht called Ice that costs $150 million. It is said that last year the richest man of the planet Bill Gates visited the yacht together with his wife Melinda and allegedly wanted to buy it. But the Russian oligarch wanted to keep the wonderful property.

Norilsk Nickel co-owner and haunter of all high-society parties Mikhail Prokhorov has a yacht called Solemar where he loves to organize merry parties. But the number of guests has increased so much that the oligarch now needs a new boat. Mikhail Prokhorov has ordered a new bigger yacht. Unofficial sources report that his new boat will be made on the same shipyard where a new gorgeous yacht is being made for Roman Abramovich, Blohm & Voss in Germany. It is also said that Prokhorov will order yacht decoration of more expensive wood sorts that is being used for the Chukotka governor. Owner of the Kommersant publishing house Alisher Usmanov has a yacht Dilbar named after his mother and also some other boats. At least one more new vessel is being currently made for him.

Until recently, Interros owner Vladimir Potanin used to rent yachts for his family. It is said that soon Potanin will also purchase a yacht. Sources informed Izvestia that a shipyard in Holland is making a yacht for Potanin. This new yacht will be named Anastasia after the oligarch’s daughter and will be perfectly equipped for doing sports, for aqua bike particularly as Potanin’s daughter Anastasia has been the world champion in aqua bike three times. The businessman and his children are fond of sports, aqua bike particularly, and will need the new yacht for going in for sports. As for decoration of the new vessel, it is unlikely that Potanin will have an anti-missile defense system and special tanks for a submarine. His new vessel will be absolutely practical and have hi-tech design instead of ostentatious luxury.

Last year, head of Basic Element holding company Oleg Deripaska also got a yacht of his own. He purchased it from a Japanese company for less than $100 million on condition that the new owner must immediately rename it. Deripaska renamed the yacht Queen M into Queen K. It is rumored that Deripaska demands that the yacht crew must not meet with guests, and the crew has to leave their cabins only when it is necessary for yacht operation. Marketing expert of Moran Yacht & Ship Roman Kovalev says that smart yacht designers make their yachts arranged so that the crew does not need to enter the sector of the yacht where guests stay. On the contrary, some yacht owners love to demonstrate their yacht crew to guests. It is a nice style when a yacht crew lines up on the deck to welcome guests, Oleg Kondruk from Laky Verf says.

The expert adds that this season clients better order yachts made of metal rather than of plastic. The light metal aluminum makes a yacht more maneuverable. A vessel made of plastic is cheaper than that made of metal but it is known that things made of it smell which is not pleasant indeed. Today it is more popular to order making new yachts than purchasing ready-made ones. In general, the number of good vessels that appear in Russia now is increasing. Yacht owners care more about the design of their vessels and even invite well-known designers for exclusive decoration of yacht interior.