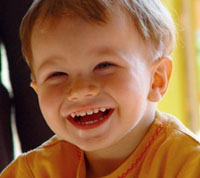 A man starts laughing when he is only three years old. Babies smile because they feel happy. A grin on adult's face is another story. Laughter in infancy is the reaction to a feeling of comfort. As we grow older we start laughing for different reasons and without any physical motivation.

According to scientists ancient people's laughter was connected with aggression. This version suggests that people learnt how to laugh in the course of intertribal conflicts. Winning the battle they would produce meaningless sounds to get rid of the emotional tension. At the same time their faces remained furious. It is these sounds and grimace that then became associated with a feeling of self-content. Several ages later laughter became a universal reaction to positive emotional experience.

Some scientists claim that ancient laughter had only a punitive function. For example, people that were driven away from the tribes were ridiculed, which at that time was equal to execution. Some pre-Christian gods, like Zeus or Odin, possessed laughter as a symbol of power and punishment.

Starting from the VII century, when agriculture deities became dominating in the world ritual laughter changed drastically. Agriculture deities were presented in myths as dying and then resurrected creatures. And these mysterious creatures also had laughter as one of their main characteristics. However, in this case it turned from the symbol of power into symbol of death followed by resurrection. Laughter became ambivalent combining two oppositions – life and death.

Pagan agriculture cults were replaced by the Christianity in the Middle Ages. However, they left their traces in the carnival culture. Medieval man was a bit childish and liked to do forbidden things for fun. Such was the nature of the medieval carnival, which was a national festival right before the Lent. During this festival all the common rules were broken. People dressed up, chose jester kings and then bit them. All this was accompanied by laughter and parody. During the days of festival people followed one and only principle: we must not do this; that is why we are doing this. The new culture let people break the rules without treating it seriously. A laughing person could be anyone he wanted to be.

Carnival partly lost its original meaning in the XVII century after Protestantism had spread around Europe. Protestant ascetic morality could not tolerate such freedom. The age of Enlightenment as wellcould notfittogether with buffoonery. It was the start of the intellectual comicality era, which is still considered the greatest achievement in risorial culture.

Tradition of the carnival broad laugh became improper even among common people. Everybody would aim at becoming bourgeois whose life had to be devoid of over-indulgence, idleness and theatricality. As far as the educated people are concerned (who were mainly noblemen), the laughter that was “fashionable” among them was intellectual. It meant mocking at ideas, social problems and politics. Enlighteners were making fun of clerical obscurantism. Romanticists were laughing at enlighteners while they themselves were ridiculed by the rationalists. All of them together were mocking at government, traditional morality and bourgeois narrow-mindedness.

The situation changed after the World War II. The triumph of liberalism in Europe and removal of almost all of the social bans led to the fact that there was nothing to laugh at. If there are no bans there is no laughter as well. Russia was an exception. Soviet regime was a perfect target for humor whereas totalitarian censorship gave rise to a peculiar comic element that was based delicate hints and double meaning. However, after the USSR collapsed Russia faced the same “laughter” problems as the West.

Crisis of the intellectual humor and establishment of consumerism values revived the forgotten carnival broad materialistic laugh. The sources of this laughter are found in primitive common sense and lower part of the body. Probably the most famous of the representatives of this kind of humor would be Benny Hill. The word ‘primitive’ in this sense stands for simple rather than silly. The difference is easily grasped if one starts applying intellectual measures when evaluating the carnival laughter. The main way of transmitting this culture is the ultra mass media resource – television. It follows the rule which from its very logic: the simpler the joke is, the more people are laughing.

There is no sign of the revival of lambent humor. Quite the contrary. However, modern intellectuals have a way to find way out. There is a unique source of laughter – the Internet. Although it is also based on the carnival principles yet it gives the opportunity to find soul mates. That means it can satisfy both an intellectual and a simpleton. Anyone can find a person to laugh with without being afraid of any consequences. But the more important is that Internet is able to create a new culture – the culture of Intellectual Carnival. Doesn't this mean a cultural revolution?