Twenty years ago, May 28, 1987 Mathias Rust, 19, from the Federative Republic of Germany landed a single-engine Cessna-172B Skyhawk on Moscow’s Red Square in the Soviet Union. The flight of the amateur pilot ended in resignation of Soviet Defense Minister, Marshal Sergey Sokolov and Air Defense Commander-in-Chief, Aviation Marshal Alexander Koldunov. Another nine generals and 298 officers were dismissed from their positions because of the incident. 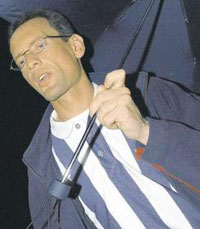 At that time, Germans loved to tell each other the following joke: “Why is smoking not allowed on the Red Square? Smoking at airports is prohibited!”

These days Mathias Rust, 39, gave an exclusive interview to the German tabloid Bild.

Now he is a man with grayish hair in whom one can hardly recognize a young smiling guy wearing glasses who got out of his plane in the very heart of the Soviet country in 1987. He says he would have given up the idea of the flight if he could.

In the Bild interview, Rust says that he sincerely believed that the risky adventure would serve peace purposes and put an end to the arms race. Now he sees that was too naïve of him to think so. The time Mathias Rust spent in jail put an end to all of his fantasies.

September 4, 1987 German Mathias Rust was sentenced to four years in a labor camp for breaking the air frontier. After the German was kept at Moscow’s Lefortovo prison for 14 months (432 days) he was pardoned. August 3, 1988 the notorious prisoner was released and extradited from the Soviet Union. Later, a Japanese collector bought the plane that Rust had landed on the Red Square at some auction.

The amateur pilot regrets what he did twenty years ago. “I do not know what suddenly occurred to me then. Now I am ready to ask pardon for that strange landing. I am not a criminal at all,” Rust adds.

Soon after Rust got back home his name appeared in the press once again. During his alternative service at a Hamburg clinic the man attacked a nurse who rejected his advances with a knife. So, in 1989 another imprisonment followed for wounding and an attempt of killing. Rust was sentenced to 30 months of jail. In 15 months, October 1993, Mathias Rust was released ahead of time. Later, Mathias Rust several times appeared at court for smaller crimes such as stealing a cashmere pullover from a store in 2001 and swindle in 2005. In both cases he was obliged just to pay a fine and no imprisonment followed.

Now Mathias Rust says he is living a quiet solitary life, enjoys jogging and sailing. Three years ago he divorced his second wife, an Indian by origin . The former resident of Hamburg now spends a great part of his time in Berlin.

Mathias Rust is a real adventurer and earns his living by playing roulette. He boasts that once his biggest winnings in Las Vegas made up $750,000 but he lost a great share of the sum in a gamble at the same casino.

When released from the Soviet prison, Mathias Rust had to hand in his pilot license. But the man is determined to complete more flights soon. He says he has got a new pilot license in South America. His last flight took place in November 2006. Mathias says that flights are the best thing in the world. When asked if he would like to celebrate the 20th anniversary of his legendary flight to the USSR right in Moscow, Mathias Rust said he planned to go to Moscow in connection with the date but this time it would be a regular flight.