Three weeks have passed since the death of Boris Yeltsin. Sociologists from Levada center conducted a number of polls to find out Russian people’s attitude towards the first Russian president. The results were quite different – what Russian people say about Yeltsin now differs greatly from what they said and thought about him earlier. Russian people’s attitude towards Yeltsin has changed from negative to neutral. The number of Russians saying that their attitude to Yeltsin changed from negative to positive has increased twice. Sociologists do not know what made people change their minds. It could be explained with the Russian tradition not to say bad things about dead people or the efforts of the Russian media to improve the image of the first Russian president. 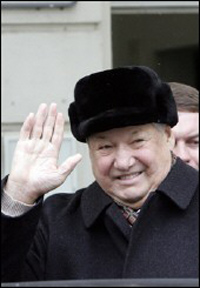 At the end of 1980s and in the beginning of the 1990s Boris Yeltsin enjoyed great popularity. Since then his popularity began nose-diving. In 1996 Yeltsin’s election headquarters decided to find out people’s attitude towards Yeltsin’s second term as a president . The results were shocking.

Boris Yeltsin died on 23 April 2007. In the middle of May sociologists from Levada center carried out several polls that proved that a person in Russia receives much more public respect if this person is dead.

Sociologists asked respondents to evaluate Yeltsin’s epoch from historical perspective and say whether his rule brought more good or bad to the nation. A year ago only 13 percent of Russians said that Yeltsin’s era was good for Russia. Today the amount of respondents sharing this point of view has doubled (26 percent).

The most interesting fact is that for the first time less than a half – 47 percent – said that they evaluate Yeltsin’s role in history as negative. Before Yeltsin’s death 70 percent Russians thought so.

Experts say that it is difficult to make any forecasts about the future attitude towards Boris Yeltsin. They say that such a thaw in the public attitude may be caused by the old Russian tradition not to say bad things about the dead.

However, it should be mentioned that the media show great influence on the public opinion in Russia. After Yeltsin’s death most Russian TV channels broadcast only positive programs about deceased Russian president. The collapse of the Soviet Union was shown as an inevitable historical fact for the first time. Experts began saying that Yeltsin’s reforms helped Russia avoid hunger and that he managed to give true freedom to Russians. That is why the further opinion about Yeltsin obviously depends on the position of Russian authorities and media.