Halloween based on gloomy and horrible history

Halloween is also known as All Saints' Day. Legends say that at the end of October, the Earth is in the power of devils and demons, it is the holiday of ghosts, witches and sorcerers. 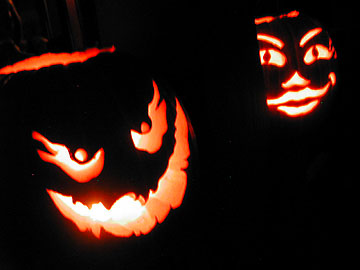 Being inspired with the success of the American film The Blair Witch Project telling about a witch living in some part of the US, British people decided to find out if witches actually existed in the history of their country. In Britain, Mother Shipton is considered to be one of the famous old witches. The woman was born in 1490 in a cave close to the village Knaresborough where many witches and sorcerers were living in that time. Locals believed the girl's mother was a witch; she died as soon as gave birth to the daughter. The girl, Ursula, began to cry loudly and a woman going by the cave heard the crying and took the newborn girl.

The good woman soon noticed many strange phenomena. She found gold coins in various parts of her house which she guessed she must spend to buy food and clothes for the fostered baby. From time to time, some strangers came to the woman's house and brought many potions that helped Ursula remain healthy and even cured the good woman of some diseases. Every time the woman got angry with the girl and shouted the doors and windows in the house began to slam. When the woman praised the girl she felt as if some invisible soft touches caressed her face and neck. Villagers supposed the phenomena suggest that the girl is a daughter of the devil. Indeed, nobody ever saw that her mother had a man close by her side.

When the girl grew up she became a very kind sorceress. She always cured people of the neighborhood for free and warned them of various natural disasters. The Royal Court also knew about the girl because she exactly predicted when the huge Spanish fleet would approach the English coast in 1588 and when London would be gripped with fire.

Thanks to the prediction, nobles managed to hide their belongings and did not suffer seriously during the fire. The legend says the young witch loved men. Being very young she married carpenter Tony Shipton but the latter died several years after the marriage. Then the widow began to seduce young handsome men. Even being a very old woman, she usually met boys in the forest and seduced them having turned into a young beautiful girl. Villagers said they often saw young men having sex with the old lady in the forest. Many young men in those years boasted in pubs that they met a beautiful girl in the forest who agreed to give them some of her love. Mother Shipton obviously had some hypnotic talent which she employed for seduction. She was the only in the history of England witch who died her natural death in 1561.

But thousands of other witches ended their lives in tortures. Isabel Goody from Oldern turned into different animals to scare locals. She particularly loved to turn into a cat, get into somebody's house and talk to the owners in the human language. Goody also made potion of toad heads, lizard tails and goat hoofs to give it to men who after drinking turned into voluptuaries copulating with any woman and even cows.

Goody had to stand a trial in 1662 where she confessed all the charges brought against her. It was at that time that the English language adopted the word 'Sabbath' about which the witch told the jury after she revealed repentance. Goody told that a Sabbath could take place when at least 13 witches participated in it. The witch was sentenced to burning in a fire.

Joan Whitty from Cornwall shared the same tragic fate. A legend says that the witch could kill cows, make dogs rabies and caused miscarriage with pregnant women just be having only one glance upon them. The witch pronounced the most terrible prophecies after drinking a bottle of brandy. Usually all of the prophecies came true. The Sun reports that locals complained to the authorities about Whitty and the witch was taken into prison where she died of pneumonia in 1813 waiting for a trial.

The Inquisition was not that furious in Great Britain as in Spain, but it also happened that on the island groups of people were liquidated upon suspicion of their connection with the devil. At the end of the 16th century in the area of Tranent, Gillis Duncan working a dishwasher in a tavern suddenly discovered she could cure diseases, even the gravest ones. She stroked dying people with her hands, then whispered some words to them and the patients found themselves absolutely healthy the next day. The young woman was suspected of witchcraft and was subject to torture to learn the truth. She was so terribly tortured that told everything inquisitors wanted to know. As a result, clergymen seized 70 honored people of the place, accused them of connection with the devil and sent them to prison where the people were terribly tortured and tormented.