Many Russians and foreigners would like to know how the people of Belarus live. Russia is not only a neighbor to Belarus - Russians and Belarussians make two brotherly nations sharing common Slavic roots. They both have a similar mentality and, hopefully, relations between Russia and Belarus are bound to become even closer in the future. The interest in Belarusian affairs intensified following the recent statement by State Secretary of the Unified State, Pavel Borodin, regarding possible introduction of a single currency policy slated to be effective January 1st, 2006. 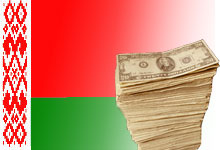 The difference in a standard of living was rather insufficient in the Soviet era. For example, in 1989 the number of the poor (with average income of 75 rubles and below) was 3.3% in Belarus and 5% in the Russian Federation. In fact, average pay was a bit higher in Russia those days while the neighbors took advantage of owning plots of land for growing fruit and vegetables. The studies of family budgets show that the difference between the mean aggregate incomes of workers and employees in Russia and Belarus eventually ceased to exist at the time.

The former parts of the Soviet Union took their own paths following the collapse of the Soviet Union. Russia's citizens had to survive “shocking therapy,” a dramatic economic reform program “administered” by ultraliberal reformers. As a result, a third of the country plunged into the dark of poverty. On the contrary, the government of Belarus refused to pursue the “shocking policy.” The authorities treated every novelty in the economy with utmost caution. The state was not keen to let go of the control levers in the economy. A private sector is still a tiny spot on the map. Private companies own about 35% of capital assets in Belarus. The indicator for Russia is twice as larger.

The situation in foreign exchange market is not so good either. Belarus' foreign debt totals $4.4 billion as of April 1, 2005, while the foreign reserves amount to $1.46 billion.

Advocates of the conservatives methods in the reforms implementation point out certain achievements of the strategy e.g. high economic growth rate (15.9% last year) over the last nine years. By the way, the impact of the economic crisis of the early 1990s on the economy of Belarus was not that severe as it was in Russia, and, therefore, the Belarusian economy began to recover earlier. There are statistic data  to back the statements. In the meantime, World Bank experts draw attention to certain instability of the Belarusian economic model citing high production costs, heavy government regulations, underdeveloped banking sector and a lack of foreign reserves. “We can not see any new factors capable of maintaining that customary high economic growth rate in Belarus,” says the report released by the World Bank this June.

The situation in social area is even more difficult. The standard of living plummeted in Belarus even deeper than it did in Russia in the 1990s. Nearly half of Belarus' population (46.7%) was reported to be living below the poverty line in 1999. The worst indicator for Russia was 33.5% in 1992. The fight against the large-scale poverty became a priority for both countries. The Belarusian government has been stepping up its program to reduce the number of the poor and underprivileged. The Belarusian government seems to be succeeding. There was a significant decrease in the percentage of the poor in Belarus in 2004 (17.8%). The indicator for Russia at the time was the same.

As regards a number of other indicators showing the standard of life, Russia still leaves Belarus behind. Average gross payroll in Russia as of May this year amounted to 8,089 rubles or $300 at the official exchange rate. Average gross payroll in Belarus at the time was $209 at the official exchange rate. It is understood that the numbers can not produce a full picture, an average pay should be correlated with an average level of prices in each country.

Statisticians normally analyze how many food baskets an average paycheck can buy in the nation's capital. The food basket comprises a kilo of beef, a kilo of butter and vegetable oil, a kilo of sugar, wheat bread, potatoes, cabbage, a liter of milk, and ten eggs. According to calculations of Statistical Committee of the CIS, last year an average pay could buy 28,8 of the food basket. The data for Minsk, the capital of Belarus, was a little lower, 23,6.

“The income of a 10% group of the well-off population exceeds the income of the same-sized group of the underprivileged by 5,2 times, not three times,” a source in Minsk told The Trud newspaper. The same correlation was 1:14.5 for Russia in the first half of this year. No doubts about it, the income gap like that can be regarded excessive. Still, it is simply impossible to draw parallels between Belarus and Sweden using the numbers of social differentiation. The standard of living in the Scandinavian states is a sci-fi movie both for Russia and Belarus.

“Unlike Russia, Belarus is making fewer mistakes with regard to the economy and social area,” said Igor Nikolayev, head of the FBK company that deals with analysis and forecast. Mr. Nikolayev said Belarus was taking lessons by watching Russia make mistakes. Some CIS countries i.e. Kazakhstan are stepping up their reform plans. Speaking of Kazakhstan, it has made some achievements. On the other hand, you can simply sit on the fence and watch your neighbors. That is what the Belarusian government is doing, either on purpose or by accident. They do not rush ahead with reforms in the energy or public utilities sectors. They do not speed up a reform of the national pension system either. This policy does not bring about spectacular results yet it is a lot better than confusion and inconsistency shown by the Russian government over the last fifteen years.

This April an opinion poll was conducted by the All-Russian Center of Public Opinion Studies as part of the project The Eurasian Monitor. The poll aimed to probe social atmosphere in Russia, Belarus, Ukraine, and Kazakhstan. On the whole, the Russians and Belarusians evaluated the financial state of their families in a similar way (“good” by 10%-11%; “average” by 58%-59%, and “bad” by 27%-30%). President Putin's approval rating was 67% in Russia as President Lukashenko got his 53% in Belarus.