Should Professor Woland, one of the protagonists of Mikhail Bulgakov’s The Master and Margarita, pay another visit to Moscow these days, he would be greatly amazed at the changes about the people. 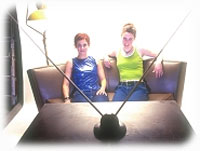 Sometimes it seems that basic daily concerns and interests of an average Russian boil down to the following: take a swig of beer, hit the bottle, have a puff on a joint in some trendy disco, and get laid to top off “another fine day.”

Turn on your TV set and tune to any Russian channel in the afternoon. You are likely to get an eyeful of ubiquitous series, which normally feature 7-8 murder scenes an hour and one unstoppable party theme stretching over the whole episode. Those series are broadcast mostly for children, housewives and pensioners, a regular daytime audience. Things get rougher on the screen when primetime viewers get from work and get hold of their remote controls in the evening. The scenes of debauchery, violence and sex are broadcast every six minutes. The viewers who publicly criticize the programs are usually told by TV bosses: “Let the people watch whatever they want to watch.”

At the same time, we seem to be told by those bosses that their TV channels are bringing the so-called European culture values to our households. Perhaps the Russian TV will soon put us through the test as if we were applying for residence permit in Holland. Those who seek residence permit in Holland are recommended to watch a film featuring gays involved in soul kissing and girls caught skinny-dipping. The Dutch authorities show the footage to the applicants and take their reaction into account while making a decision whether the immigrants are mature enough to qualify for the European “political correctness.”

The family values are coming under attack in Russia. There is a strange contradiction. On the one hand, the Russian government is launching nationwide projects aimed to boost the role of a family and promote motherhood. On the other hand, the Russian state-controlled television is spreading scenes of debauchery and banditry far and wide. Tabloids reporting on another affair, marriage or divorce of a pop star or tycoon sell like hot cakes.

Leo Tolstoy’s novel Anna Karenina was published 130 years ago in Russia. The novel was centered on the “illegal” love affair between Anna and Vronsky. Russia’s “progressive public” (the term much in use at the time) were unanimous in their condemnation of Karenin, the “bore” who refused to consent to a divorce for his infidel wife. In the meantime, the conservative critics laid emphasis on the traditional Christian values being eroded by new capitalist morals.

The debate is raging on. The advocates and opponents of civil and church wedding, divorce and abortion, monogamy and polygamy are still at loggerheads with one another.Thedebate resulted in a curious incident that made the headlines across Europe several years ago. The Danish supporters of the freedom of love and abortion funded the building of several floating abortion hospitals, which were subsequently anchored along the coastline of a “conservative and Catholic” Spain in order to give women a “chance of making free choice.” A scandal ensued, triggering a heated debate about the bounds of freedom. In particular, the public were discussing the impact of “sex without frontiers” on the morals, family values and education of children.

The family values in the Russian Empire had been protected by the state, Church, tradition and law up to the year 1917. Divorce accounted for a mere 0.4% of all marriages. Nowadays every second marriage in Russia ends in failure. The Russian electronic media play a major role in the formation of a “lightweight” attitude towards family values in the eyes of the public. The opinion polls indicate that about 50% of the respondents see infidelity as permissible, while 73% have a rather lenient stand on prostitution. The number of those who are ready to close their eyes to drunkenness is even larger. It is worthy of notice that those Russians who like to be described as the nation’s “rich and beautiful” have the highest divorce rate. They are also on top of the list with regard to a multiple marriage rate.

Meanwhile, the issues regarding family values and marriage fall way outside the limits of a purely moral debate. Russia’s demography i.e. socioeconomic development is at stake. There was a decrease of 300 thousand people in the able-bodied population of this country last year. According to estimates contained in a report by the Institute of Economy of Transitional Period, an annual decrease of the able-bodied population may amount to 1 million people in the next ten years. The authors of the report stress the point that “the doubling of Russia’s GDP will be simply out of the question if the population decrease continues at such a pace.”

There are more appalling statistics to consider. Russia will have to let in 20-25 million of immigrants to compensate for the dreadful consequences of the family crisis and low birthrate. The potential of ethnic Russians who return to their motherland has virtually run dry. In other words, every 6th or 7th new citizen of this country will be an immigrant of non-Russian origin, in most cases. Lots of people of different religious, cultural and moral backgrounds will be coming to Russia to stay. We can only guess what kind of impact the trend will have on a social climate and interethnic relations in Russia.