Russian people should think more of their own national holidays and give less attention to festivities of foreign origin, like Halloween, a clergyman of Moscow Patriarchy of the Russian Orthodox Church told Interfax. 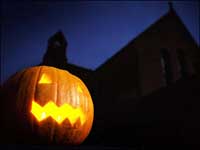 “The celebration of Halloween in Russia has become quite popular. This fact shows that we should be more careful with borrowing foreign holidays. It also proves that Russians can be culturally omnivorous, although we should value our own national traditions and customs. I believe that this is a very sad tendency,” priest Mikhail Prokopenko said.

The clergyman believes that Russian people can easily forget about their national roots and follow customs, rules and traditions of a different culture or religion.

“We have to realize that Halloween is just a masquerade, an entertainment which may often imply commercial interest when shops sell their entire stock in a couple of days. Nevertheless, a young man or a woman, who dress like vampires or demons, are led to believe that they can display monsters’ qualities in real life,” Mikhail Prokopenko said.

Indeed, Halloween has been gaining more and more popularity in Russia during the recent years. The celebration of this holiday often takes place at public schools and even kindergartens of Russia.

“Many individuals, especially parents, may express their ungrounded concerns over the appearance of such school subjects as the Basics of Orthodox Culture. However, they are happy to see their children wearing demonic costumes for Halloween or exchanging Valentine cards on St. Valentine’s Day and so on. These holidays are not Russian,” Prokopenko concluded.

Become a member of Pravda.ru community. Registration is free