Adolf Hitler's army invaded the Soviet Union on June 22, 1941. He hardly knew that was the day when the Russian Orthodox Church traditionally commemorates the Day of All Russian Saints. And during the war Russians saw that even though God’s punishment was severe, the Russian saints were still praying for the Russian people. June 22, 1941 was the beginning of nation-wide disasters but at the same time it was the day when ablutions of people’s souls through suffering began as well. That was the time of spiritual reviving, penance; and people felt they must get back to their desecrated relics. 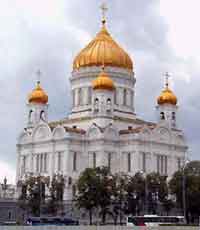 There was hardly a soldier during WWII who still remained an atheist in the face of death. Before leaving for front, majority of soldiers put on their underclothes crosses that they had to keep hidden because belief was unpopular under the Soviet regime. Soldiers read prayers before every fighting and always kept in memory the benedictions their mothers pronounced over them before leaving for war. People staying at the home front crowded churches and prayed for the victory of Soviet soldiers. Mothers, wives and sisters were praying for their men who fought and fell victims to liberate the native land from the German invaders. That was the period of Russia’s spiritual revival.

In 1943, the Soviet government considerably changed its position as concerning the church. Metropolitan Johann wrote about Stalin’s legendary meeting with the most outstanding Orthodox hierarchs and said that results of the sudden changing of the governmental line were really stunning. “When the war broke out, there were from 150 to 400 functioning parishes on the Soviet territory. Within the next few years thousands of new temples were opened, and some documented evidence stated the number of Orthodox communities increased to 22,000. A great part of the clergy subjected to repressions was liberated.” The Orthodox church won the cruel war with atheists, and those who were fighting against the church were forced to fall back.

Joseph Stalin proposed a toast to the great Russian people at a banquet dedicated to the victory in WWII, which in its turn meant that from now on patriotism along with Communism became an established basis of the governmental ideology. Neither Hitler who invaded the Soviet Union in 1941 nor Stalin who ended it with the legendary toast knew about a prophecy made by blessed monk Aristocliy in Moscow in 1918. “As time goes by, Germans will invade Russia to save it. They will not stay here and get back home. And when the invasion is over, Russia’s might will get even stronger,” the monk said.

In 1945, the Russian Orthodox church celebrated the Easter and the George the Victorious Day one and the same day, May 6. That was also the day when WWII ended and German troops agreed to capitulate. So, the Russian people triumphed because of God’s rising from the dead and the long-awaited victory. Russia obtained the victory by prayers. And the lives that the country sacrificed during fighting and at the rear front were necessary for establishing the Truth in the country and for regeneration of people’s souls.

Register on Pravda.Ru Discussion Board for free!