In Dagestan, the Islamic clergy has launched a mass campaign against local entertainment establishments. Imams urge owners of public saunas, casinos and night clubs to change the specific of their establishments, otherwise “damnation will strike their families.” To make the prophecy even more effective, imams decided to make an inspection of saunas in Makhachkala and say prayers there. 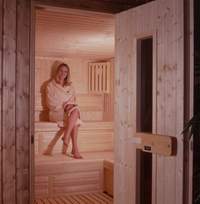 Imam of Dagestan's central mosque, Magomedrasul Saaduyev, told the Izvestia newspaper: “To go to a sauna means today that a man spends time with a prostitute there. We are astonished that law enforcement structures have been always that inert as concerning public saunas and so on. The Penal Code classifies organization of sex services as a crime. But today, we cannot stand this mess any longer.”

Several days ago, the Council of Imams appealed sauna owners with the following statement: “You disobey the Most High by running saunas, and God will visit retribution on you for this. By receiving profits from public saunas you incur troubles upon yourself, your families and even your descendants. God will reward you in case you close your establishments; the people will be grateful to you for this doing and your family will prosper.” In case sauna owners ignore the appeal, the community will be requested not to come to their funeral and ask Allah to send troubles on them.

President of the republic of Dagestan, Magomedali Magomedov, supports the initiative. Dozens of Moslem groups have been formed to say prayers in saunas. One of the group members Ahmed Abakarov, 25, told Izvestia that each of sauna owners reacted to the visit his particular way. “Some owners preferred to escape; then sauna administrators said they were no authority and could not change anything. Others said they never considered the religious and moral aspect of their business, and promised to think it over now.”

The Islamic groups intend to change the public life in Makhachkala. “This is true that we are living in a secular state; but what we are doing does not contradict the temporal law. There is no violence in our visits to saunas; we just say prayers and urge to think about the moral aspect of this business,” imam from one of Makhachkala's mosques, Ibragim Kuliyev, told the Izvestia.

But in fact, with this initiative imams are making attempts to regulate not only the public life in the republic, but also the funding of illegal entertainment. A source in the Dagestan Interior Ministry department for struggle with economic crimes told the Izvestia that up to 300 million of rubles pass through this illegal business. The Islamic groups are still persistent with the idea, and they are encouraged with the success of their first visits: seven saunas have already been closed, and owners of 23 saunas more promised to close their saunas down in the nearest time.