The whole of Russia celebrated the 61st anniversary of Victory in the Great Patriotic War which lasted for 1,418 days from 1941 till 1945. Moscow, the center of all V-Day festivities in Russia, started celebrating the holiday from the traditional grand Victory Day Parade on the Red Square. Over 5,700 servicemen took part in the parade. 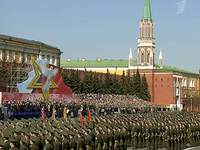 Russian President Vladimir Putin today presided over the annual Red Square parade celebrating the Second World War victory over the Nazis. He paid homage to the elderly veterans who fought the battles that turned the tide for the anti-Hitler forces, but not once mentioned the Soviet Union’s allies.

Putin’s brief speech from a podium in front of Lenin’s Mausoleum reflected the current, uneasy period of discord with its one-time allies in the West. While the celebrations this year are unlikely to reach the level of last year, when the 60th anniversary of the war’s end brought 57 world leaders to Moscow, events to mark the date are nevertheless far-reaching. Television channels will air war movies and documentaries, opera houses are hosting concerts of patriotic songs, and a series of marches and parades will take place across the country, with the main event held traditionally on Red Square.

Putin called the holiday, Victory Day, “a day of great triumph of our people”. He said the war effort represented the people’s unity. “And history before had never seen such unity, such sacred brotherhood, such powerful faith in victory,” Putin said.

War veterans, Muscovites and guests of Moscow will have a possibility to attend numerous concerts and many other entertainment programs held all across the city today. Eleven special planes guarantee fine weather in the Russian capital. Each of the planes has been equipped with ecologically pure substances to make the clear-blue sky above Moscow and disperse clouds. Celebrations will end at 10:00 p.m. today with grand fireworks in many Russian cities such as Moscow, St.Petersburg, Volgograd, Novorossiisk, Tula, Smolensk, Murmansk and others.

Over the last year, much debate has been given to the topic of fascism, not just in its Nazi incarnation, but also a modern revival of its ideology, with some suggesting that it may be becoming a problem in Russia today.

Unlike most of the other holidays on the Russian calendar, this day is particularly important to the vast majority of Russians. It is a day when the remaining war veterans are given center stage, and one when Russians feel great pride in their country and the decisive role of the Red Army in defeating the Germans.