Widespread myth shattered as Russian matryoshka first made in Japan

The widely-held view that Matryoshka dolls are an ancient native Russian toy is sadly just a myth. The first Russian Matryoshka was carved out and painted in a Moscow toy workshop only in the 1890s, based on a model brought in from Japan. This Japanese model, created with a great deal of humour, was made up of a large number of figures which fit inside each other depicting the Japanese sage Fukuruma: a balding old man with his head tilted backwards due to frequent contemplations. The first Russian matryoshka was made up of a group of children: eight dolls depicted children of different ages, going from the eldest girl with a cockerel to a baby wrapped in swaddling clothes. 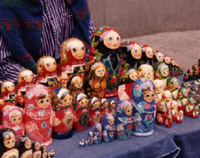 Widespread myth shattered as Russian matryoshka first made in Japan

Although the first matryoshki which were issued by the cooperative “Children’s upbringing” were aimed at children, they were expensive and were in greater demand among adults. At the end of the 19th century there was a genuine matryoshka boom. Manufacturers appeared in reply to the unexpected demand. Within several years practically the whole of Sergiev Posad was decorating matryoshki. It was there that a large amount of experienced craftsmen accumulated, along with excellent material: birch and lime. They were decorated both by old people and children in family workshops.

On the whole Russian matryoshki depicted girls and women, in Russian pinafores and headscarves, carrying a basket, flowers, bread and salt. Russian matryoshki proved to be popular abroad, especially in France and Germany, and at the start of the 20th century matryoshki began to be exported to other countries in mass quantities.

The business in matryoshki turned out to be so profitable that soon several centres of matryoshka production appeared, in the town of Semenov in Nizhegorod gubernia and in the village of Polkhov-Maydan. Furthermore, it was at that time that the first foreign forgeries began to appear. Several German firms carved and painted matryoshki, passing them off as Russian.

In spite of the fact that you can come across matroyshki in unexpected shapes, such as spherical or cone-shaped, in the form of caskets or bottle-holders, the most popular matryoshki have been and still remain figures imitating the female body. Sergiev dolls are as a rule denser and stockier than Semenov ones. Apart from the matryoshki depicting Russian women and girls which are popular abroad, workshops began to issue historical (Kutuzov, Napoleon) and literary matryoshki.

As far as the number of parts is concerned, the most common and now most popular is the five-figure matryoshka. However, one can often come across matryoshki with three, seven, ten and fifteen figures. The latter is incidentally not the limit. In 1913 a 48-piece matryoshka was carved. Admittedly this kind of doll is extremely rare, the craftsman needs to be extremely skilled in order to produce it, and therefore mass production of these matryoshki is impossible.

Just as a century ago, in Sergiev Posad and Semenov now whole families are involved in decorating the dolls. Factory matryoshki, also produced there, prove to be non-competitive and too expensive. Incidentally, modern matryoshki are much less toxic than they were in Soviet times, when they used aniline paints, they tend to paint the dolls nowadays in gouache. There are some unpainted models, but it is almost impossible to understand what they are at first glance.

Painting your own matryoshka is a difficult, painstaking but gratifying task. Even if you strive just to copy an existing figure, it will inevitably turn out differently, it will be your own unique doll.