The majority of non-Muslims are certain that there is no sex in Islam. The general perception of the issue has been formed on account of certain Muslim traditions, according to which women, for example, are supposed to wear paranjas, that Islamic women are hostile to the joy of sex, they are not sensitive and that they treat sex like something shameful and dirty. 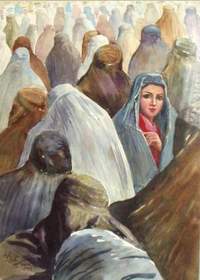 A well-known Islamic public figure, Marat Saifutdinov, the creator of Russia's largest Muslim website, and Abdullah Renat Muhametov, an expert for Islamic dogmas, expressed their opinions on the issue of sex and Islam.

The two specialists believe that Islam welcomes love and sex. There are strict religious regulations for sexual relations in Islam indeed, but they do not stop husband and wife from satisfying their sexual needs according to their likings.

A paranja or a hijab has become the symbol of sexual humiliation for the Christian world. Unlike a Christian woman, a woman in Islam does not symbolize a demonic instigation, which constantly misleads men. A hijab is a symbol of piety and modesty. When a Muslim woman puts a headscarf on, she manifests her humility toward God, not man. In addition, Muslim women want to be appreciated for their character and good deeds – they prefer it more in comparison with sex appeal appraisals. Quran tells woman to cover her head, neck and chest to protect her honor and dignity - a Muslim woman is not an object of sexual attraction. She is free to walk naked in front of her husband. Furthermore, the religion tells woman to do her best to make her husband like her.

The above-mentioned specialists believe that Islam relieves women of various comparisons based on transient advantages. A 50-year-old Muslim woman will remain as attractive to her spouse as she was at the moment, when he saw her for the first time. There is a Beautiful Lady cult in Europe – a dream that the European and the Western society has created as a result of glorifying the beauty of a woman. There is nothing identical in Islam. Is it possible to say that Islam prohibits love as a passionate feeling that a man or a woman might experience towards a person of the opposite sex? Love is an essential condition of family relations in Islam – Muslim families are not based on obscure, fruitless emotions.

Islam excludes sex outside marriage if it goes about husband and wife. There is a certain rule in the religion, according to which a man is not a man if he leaves his wife dissatisfied after a sexual intercourse. A Muslim man is supposed to take his wife to orgasm first and experience the pleaser afterwards.

The missionary position is considered the only decent sexual position in Christianity. Quran does not prohibit any positions in sex: “Your wives are your field. You may walk on that field as you like,” the book says.

The majority of Islamic scientists think that contraceptives do not break the religious laws. Pornography, especially online pornography, has become a usual phenomenon in modern everyday life. Some doctors believe that the husband and wife may improve their intimate life if they watch an adult film together. Islam, however, prohibits visiting porn sites on the Internet. A Muslim man or a Muslim woman is supposed to look down if their eyes see something obscene, not to mention the intentional observation of someone else's genitals. The religion also bans reading pornographic literature for entertainment, although serious medical books about sex are allowed.

The Muslim clergy of Russia, however, prefer to think that there is no sex in Islam. They do not want to spend their time and energy on such challenges of our time as sexual revolution, virtual sex, prostitution, AIDS, homosexuality, etc that rack the modern youth.