"Life punishes those, who come too late"

The Berlin Wall was not only the concrete wall that divided the capital of Germany into two. The wall was the Cold War symbol for 28 years. In addition to it, it still remains the symbol of the end of the Cold War era. 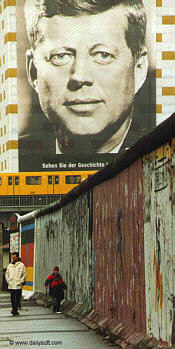 The border between the East and West Berlin was relatively provisional until August of 1961. East and West Berliners used to visit each others' homes, go to movie theatres and bars together. Female residents of the German Democratic Republic used to buy seamless stockings in West Berlin stores. Tropical fruit was available only in capitalist supermarkets too. After 29 October 1946 one could cross the border only with the help of the special pass, the Interzonenopass, which was valid for only 30 days.

The first friction between the two parts of Berlin was based on economic reasons. The money reform was launched in the American-British-French zone and then it started in the Soviet zone. Berliners began alienating from each other. The Federative Republic of Germany appeared on the map of the world on 24 May 1949. The USSR set the German Democratic Republic on its feet in just several months.

Western allies refused to use passports to enter the opposite zone on 14 November 1953; the Soviet Union insisted GDR residents should obtain a permission to visit West Germany. East German leader Walter Ulbricht signed the decree to close the border on 12 August, 1961. All transport communications between the two parts of the city were blocked. The concrete 155-kilometer long wall was built across Berlin, 20 bunkers and 302 observation posts were made afterwards too.

The history of the wall counts four reconstructions. The last one of them took place in 1975: so-called border wall 75 (Grenzmauer 75) was made of concrete blocks, it was 3.60 meters high.

US President J.F. Kennedy arrived in West Berlin on 26 June 1963. Kennedy delivered a historic speech, which started with the words “I am a Berliner” (“Ich bin ein Berliner”). The quadripartite agreement on Berlin was signed on 3 September 1971. The document eased the process to enter the GDR for West Berliners.

One hundred and ninety-two people were killed near the Berlin Wall and about 200 people were wounded. The last victim died for freedom in the beginning of February of 1989.

Guenther Schabowski, a communist party functionary, announced on 9 November 1989 that East Germans were free to go to the western part of Berlin whenever they wished to. Thousands of Berliners rushed to the Berlin Wall, which the East German propaganda called the “antifascist defense wall.” The official read out only the draft resolution, not the final document. Schabowski stated that the resolution had come into effect that moment, but he was totally unaware of consequences that his impromptu speaking would have. The entire nation definitely wanted to open the border. The GDR was a much more prosperous republic than the USSR during its post-perestroika period, but East Germans did their best to leave Germany. The people did not want to follow the party ideology, they did not want to spy on their country-fellows, they tried to resist the regime, they did not want to make up with the idea of the collective economy, they wished to raise their income and improve living conditions.

”Life punishes those, who come too late,” USSR leader Mikhail Gorbachev said. This phrase became a very popular expression in the German language. Kennedy pronounced his famous phrase in German, Gorbachev's saying was translated from Russian, but the Soviet President was more than just correct in that statement.

The GDR economy did not collapse after 40 years of the communist regime. When Soviet citizens wanted to taste freedom, they preferred to eat some delicious sausage and drink some beer. When East Germans were striving to unite with West Germans, they wanted to achieve a higher level of living. As it turned out, they were simply craving for freedom.