(New York, 5 July)- The United Nations Secretary-General Antonio Guterres  has appointed Phumzile Mlambo-Ngcuka for a second term as Executive Director of the United Nations Entity for Gender Equality and Empowerment of Women (UN Women) for a period of four years. 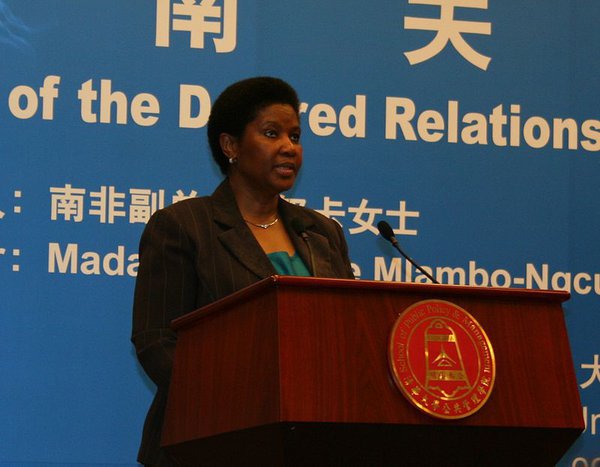 "This renewed term is our opportunity to reflect constructively, build our momentum, and surge ahead. In these years we are going to be putting our new Strategic Plan 2018-2021into practice, supporting Member States and our diverse partners to accelerate their implementation of the 2030 Agenda with gender equality and women's empowerment and full realization of their rights at its heart; we will celebrate the 10th anniversary of our establishment; and we will drive hard towards this and the other key milestones of 2020 as a firm platform for the achievement of the Sustainable Development Goals by 2030," said Ms. Mlambo-Ngcuka.

The Secretary-General's decision came following consultations with Member States and the Executive Board of UN Women. The two-day annual session of the Executive Board had met earlier the previous week to fine-tune the strategic planning for the next four years, expressing its confidence in UN Women's vital mandate and strong leadership.

Commenting on progress to date, Ms. Mlambo-Ngcuka emphasized the high calibre and commitment of UN Women's staff: "Their energy and dedication keep us going through all the challenges, and make our organization what it is. Together with Member States and all our partners, we are fiercely ambitious for the women and girls of this world, and positive that greater equality bears fruit for all," she said.

Under Ms. Mlambo-Ngcuka, UN Women has played a significant role in ensuring that women were put front and centre of the 2030 Agenda for Sustainable Development and that the responsibility of ending gender inequality became everyone's responsibility. She established game-changing movements such as HeForShe that engages men and boys.

She has been influential in transforming conversations and knowledge on the most important issues affecting women's lives such as discriminatory laws, unequal pay and unpaid care work, violence against women, disenfranchisement, and conflict and humanitarian crises through flagship programming that coordinates response through the UN system. Through this she has broadened the base of both state and non-state actors that influence transformative and irreversible change.

Before joining UN Women, Ms. Mlambo-Ngcuka worked with women and girls in different capacities in civil society and as a public representative. Her work has focused on political and economic rights as well as girls' education; her experience includes promoting gender equality for women in both the private and the public sectors. She was involved in her country's struggle against Apartheid. As World YWCA coordinator for young women's programmes, she worked with young women all over the world.

Ms. Mlambo-Ngcuka was the first woman to hold the position of Deputy President of South Africa from 2005 to 2008.  She initially became a Member of Parliament in 1994, chairing the Public Service Portfolio Committee.  She was Deputy Minister in the Department of Trade and Industry (1996-1999), Minister of Minerals and Energy (1999-2005), and briefly served as acting Minister of Arts, Culture, Science and Technology in 2004. In all her portfolios she was actively involved in policy and legislation that impacted positively on the lives of women and girls. She holds a PhD in technology-based education.