Hallowe'en - The Day of the Aos Si

And so the agricultural year dies, the underworld and our world reach the same level and there begins the time of the crossing of spirits from below to above, walking among us through the darkness of Winter. Hence the need to light fires and celebrate with festivals of light, hence the children dressed up as demons and ghouls. Humankind 2016, repeating prehistoric rites. 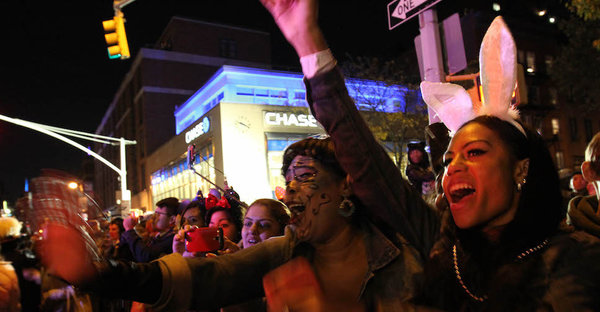 Hallowe'en, the Day of the Witches, All Hallows' Evening, Samhain. Day of the Dead. Pumpkins, chestnuts, new wine, mulled wine. A bonfire, to keep away the evil spirits, the Aos Sí and to bring the community together, the first festival of light in the dark winter with little or no agricultural produce. What is the meaning of all these symbols?

The end, or death, of the agricultural year in Europe happens around this time and as the centuries wore on, the Celtic peoples (and probably others) stipulated that at sunset on October 31 begins Samhain (pronounced So'win). This was a "boundary time" when the Aos Sí (bad spirits) could move easily from the underworld into our world and so bonfires were lit to cleanse the Earth from evil and to protect communities against it.

From the earliest times, children would go "mumming" or "guising", wearing disguises as monsters, witches or bad spirits, going from door to door asking for offerings of food and drink - or else people placed these outside their homes for the Aos Sí to take and be appeased.

A time of darkness and uncertainty

It was a time of darkness and uncertainty, a time when survival depended on how much food had been stored from the harvest and in what conditions it was in, a time when the wine or beer barrel was opened and which hopefully would last until Spring. It was a time when the fattened pig would be slaughtered and salted, when sausages would be made, hams smoked.

It was a time before the potato, which was brought to Europe from the region of the Andes in the sixteenth century. What substituted the potato at the time was the chestnut, especially in Southern Europe, where a chestnut festivity took place at the beginning of November around a Magnus Ustus, a Great Bonfire. As with Samhain, the date became institutionalized and was fixed on November 11, the Day of Saint Martin.

Medieval festivals carried across the waters

In Medieval times, these festivities were still very popular in Europe and were carried over to the Americas by the Portuguese (Brazil), Spanish (rest of Latin America), French and British (North America), where they continued, while they became less popular in Europe and were celebrated locally by communities. In some cases, they took on a different meaning, as was the case with Guy Fawkes' Night, or Bonfire Night, in the United Kingdom.

Guy Fawkes, an English Catholic, was part of a plot to blow up barrels of gunpowder under the House of Parliament when it was to be opened by King James VI of Scotland, James I of England (who became King of both countries upon the death of Queen Elizabeth I in 1603), on November 5, 1605. The plot was discovered, Guy Fawkes committed suicide just before he was hanged (he jumped from the gallows and broke his neck) and since then the day has been remembered throughout the UK with fireworks, bonfires, chestnuts and a stuffed doll representing the "Guy", children wheeling the doll around the villages asking for "A penny for the Guy".

Humankind 2016, repeating age-old rites just because it is what you do at this time of year. You dress up, you light a fire, you dance, you celebrate, you go singing round people's homes. But you also come together and the community regulates itself during the darkest and most dangerous months of the year. A good example, togetherness. It is a pity that with all the resources at our disposal, we cannot perpetuate such moments throughout the year.