Boris Yeltsin was in close contact with George H.W. Bush for the collapse of the USSR

Back in 1991, when the collapse of the Soviet Union entered its final stage, the new Russian leadership in the person of President Boris Yeltsin was trying to inform their partners from the USA about all recent developments in the collapsing superpower, former Vice-President Alexander Rutskoy said. 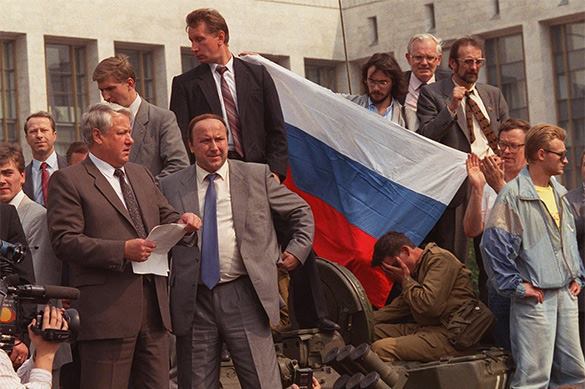 "As soon as it became known that the White House (the House of the Government in Moscow - ed.) was going to be stormed, Yeltsin wanted to go to the US Embassy. I was trying to stop him, I was telling him: You can't do that. Do you understand, what you're doing?," Rutskoy said. "When  the Belovezha Accords were signed, the first person that Yeltsin had on the phone to share the news with was George H. W. Bush," he added.

The book of memoirs by George H.W. Bush titled "A World Transformed" also says that Boris Yeltsin was cooperating with the USA for the collapse of the Soviet Union.

"On December 8, 1991, Boris Yeltsin from a hunting lodge near Brest, in Belarus. Only recently elected President of the Russian Republic, Yeltsin had been meeting with Leonid Kravchuk, President of Ukraine, and Stanislav Shushkevich, President of Belarus. "Today, a very important event took place in our country," Yeltsin said. "I wanted to inform you myself before you learned it from the press." Then he told me the news: the Presidents of Russia, Belarus and ukraine had decided to dissolve the Soviet Union," George H.W. Bush wrote.

According to George H.W. Bush, Yeltsin's tone changed after he finished reading his text. The signed documents, he continued, formulated the provisions that the USA had been advocating. Bush was unwilling to express either his approval or disapproval, so he simply responded with "I understand."

Yeltsin then continued with saying that Mikhail Gorbachev had not been informed about those results yet. Yeltsin added that he could not wait even for ten minutes not to call Bush.

Below you can read the transcript of the telephone conversation between George H.W. Bush and Boris Yeltsin from December 8, 1991, the day when the Belovezha Accords were signed:

President Bush: Hello, Boris. How are you doing?

President Yeltsin: Hello, Mr. President. I am very pleased to greet you. Mr. President, we are agreed that in the case of events of extreme importance we shall inform each other, I - you, and you - me. Today in our country there was a very important event, and I would like to personally inform you, before you find out from the press.

President Yeltsin: We are gathered here today, Mr. President, the leaders of three republics - Belarus, Ukraine and Russia. We got together and after many long discussions that lasted almost two days, came to the conclusion that the current system and the Union Treaty, which they were urging us to sign, does not suit us.

So we got together and just a few minutes ago signed a joint agreement. Mr President, we, the leaders of the three republics - Belarus, Ukraine and Russia, - noting that the negotiations on the new [Union] treaty have reached an impasse -- acknowledge there are objective reasons for the creation of independent states becoming a reality.

In addition, noting that the center's short-sighted policy led us to economic and political crises, which have affected all spheres of production and the various segments of the population, we, the community of independent states of Belarus, Ukraine, and Russia signed an agreement. This agreement, consisting of 16 articles, in fact, leads to the creation of the Commonwealth or groups of Independent States.

President Yeltsin: The members of the Commonwealth aim to strengthen international peace and security. They also guarantee compliance with all obligations under international agreements and treaties signed by the former Soviet Union, including external debt. We are also in favor of unified control over nuclear weapons and their non-proliferation. This agreement was signed by the heads of all states involved in the negotiations, - Belarus, Ukraine, and Russia.

President Yeltsin: The president and chairman of the Supreme Soviet of Belarus is with me in the room where I'm calling from. I also just finished a conversation with President of Kazakhstan Nazarbayev. I read him the entire agreement, including all 16 articles. He fully supports all of our actions and is ready to sign the agreement. He is flying immediately to the airport in Minsk for signing.

President Bush: Boris, I am grateful for your call and your openness. We'll look over all 16 points right now. What do you think, will be the reaction of the center?

President Yeltsin: First, I spoke with Defense Minister Shaposhnikov. I want to read Article 6 of the agreement. Shaposhnikov actually is in total agreement and will support our position. And now I read out Article 6 ... [...]

President Bush: We, of course, want to carefully examine them all. We understand that these issues should be addressed by the participants and not by third parties such as the United States.

President Yeltsin: That we can guarantee, Mr President.

President Bush: Well, good luck, and thank you for your call. We will wait for the reaction of the center and the other republics. I guess time will tell.

President Yeltsin: I am convinced that the rest of the republics will understand us and very soon will join us.

President Bush: Thank you again for your call after such a historic event.