In sport and for gender equality, One Win Leads to Another 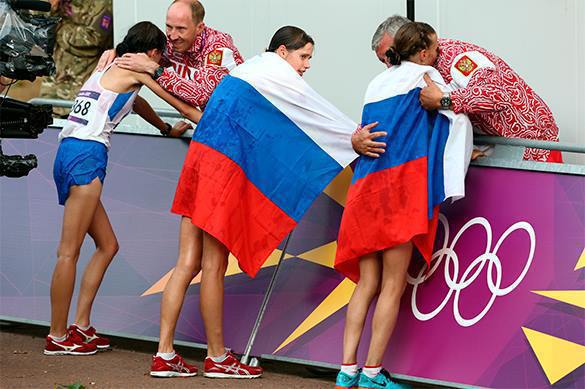 Rio de Janeiro - Coinciding with the beginning of the 2016 Summer Olympic Games in Rio de Janeiro, Brazil, UN Women, the International Olympic Committee (IOC) and Always/Whisper today celebrated the 'One Win Leads to Another' initiative, a programme that empowers women and girls through sport.

"The power of sport should never be underestimated. It can change lives, through increasing girls' and young women's beliefs in their own abilities, encouraging them to take initiative and aim high," said UN Women Executive Director Phumzile Mlambo-Ngcuka. "A girl who has learnt her own strength and resilience on the games field is equipped to translate her skill into challenging the obstacles she faces outside the arena."

Olympic Champion and IOC Member Nawal Moutawakel said: "The IOC is looking forward to continue working jointly with UN Women to advance gender equality, in particular through this One Win Leads to Another project, as it concerns the next generation of women. As an athlete and a woman, I know something about the power of sport. I have seen it in my own life. Sport touched my life and totally changed it. It gave me strength and self-confidence to overcome many barriers in my life."

One win leads to another

Twice a week, 'One Win Leads to Another' gives an opportunity to adolescent girls living in socially vulnerable contexts to go to one of the 16 participating Olympic Villas to practice sport and attend a gender workshop that uses sport as a tool to reduce gender inequalities and build and maintain confidence. Managed by the municipality of Rio de Janeiro, the Villas provide participants a safe space where they can gain economic and leadership skills, knowledge on their health and bodies, and awareness on violence prevention and available services. The skills training helps them improve their ability to influence decisions that impact their lives at all levels.

Today, Always announced that it will be joining the partnership 'One Win leads to Another' to support the training of  trainers as multipliers of the programme in line with the brand's mission to stop the drop in confidence girls experience at puberty. The Always #LikeAGirl movement has already driven societal change, changing the meaning of 'Like A Girl'. And yet, the brand does not want to stop there. Sport help girls build and maintain their confidence, which is why Always is so committed to help more girls stay in sport.

Half of girls playing sports drop out

"As the brand championing girls' confidence for the last 30 years, Always cannot accept that half of girls playing sports drop out when reaching puberty, limiting the realization of their full potential," said Juliana Azevedo, Always/Whisper Global Vice-President (P&G). "I am very happy and proud that Always is joining forces with UN Women and IOC to encourage girls to Keep Playing #LikeAGirl and help them build and maintain their confidence in these young and formative years."

By 2017, 'One Win Leads to Another' will reach 2,500 girls, aged 10-18 years, and 300 young out-of-school mothers in Rio de Janeiro, to later be replicated throughout Brazil and Latin America.

Kaillana de Oliveira Donato, Marcelly Vitória de Mendonça, and Adrielle Alexandre da Silva, beneficiaries of 'One Win Leads to Another', represented their more than 400 peers currently registered, sharing their personal experiences as participants of the programme in Brazil.

Twelve-year old Adrielle Alexandre da Silva shared her dreams of being a professional athlete or a rhythmic gymnastics teacher. She described the sacrifices she had to make to keep practising sport, yet also shared what she considers to be the best lesson of the programme. "I learned that being a winner is about making my dreams come true, helping others and helping change my community," said Adrielle. "When I carried the Olympic Torch, I was not only dreaming about becoming an Olympic rhythmic gymnast, but also about making my community a place free of violence," she added.

Kaillana, Marcelly and Adrielle, who are now teenagers, are part of the target generation for the Sustainable Development Goals. The set of Goals adopted by all UN Member States to end poverty, protect the planet and ensure prosperity for all by 2030, cannot be accomplished without achieving gender equality and women's empowerment. 'One Win Leads to Another' contributes to generate agents of change to lead the realization of this development agenda in their communities, and in their societies.