Africa: For Russia, this ship has sailed

After the collapse of the Soviet Union, Russia has left Africa. Nevertheless, the continent rich in minerals and other resources attracts such countries as France, the UK and China. Chinese goods inundate Africa. All of the African countries have fallen under the influence of the Celestial Empire. France takes uranium and oil, wood and food products from the Black Continent. Against such a background, stability is what most African countries can only dream of. 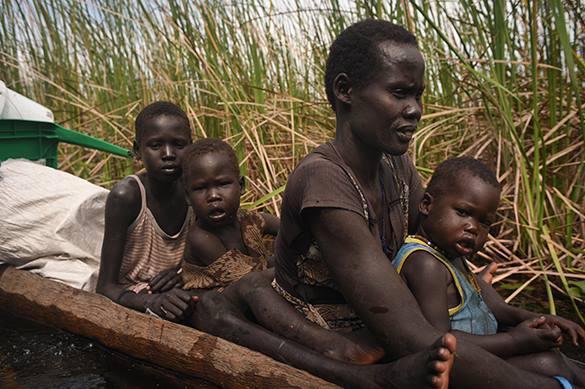 Africa consists of 54 independent states, more than a quarter of them are members of the United Nations Organization. The continent lies on 30 million square kilometers of land and is home to one billion two hundred thousand Africans. The population of Africa accounts for about 16 percent of the world's population. As for nationalities, one should use the word 'tribe' here - there are about 1,500 tribes living in Africa today. The only mono-ethnic state in Africa is the island nation of Madagascar, populated by the Malagasies.

The birth rate in Africa is still very high. It is hard to say whether it is a positive trend or not, but the population of Africa will near 1.5 billion by 2030. Equatorial rain forests - Sahel - account for up to 17 percent of all of the world's forests - this is even more than in South America.

Unfortunately, African forests are being cut down mercilessly. The Climate Change Conference in Paris raised the issue of forest conservation in Africa, but humans use valuable wood for the production of expensive furniture. Additionally, wood serves as the only source of energy for the Africans residing in rural areas.

The majority of the African population lives in rural areas, but the process of urbanization is developing on the continent steadily. There are already 60 million-strong cities in Africa. In terms of urbanization, Africa goes ahead of India.

In pictures: Silhouettes of Africa

At the same time, about a third of the African territory is the Sahara and other deserts, where nothing grows. The Sahara, the largest hot desert, continues expanding southwards, in the direction of Sahel.

Over time, if the Africans learn to use modern grain-growing technologies, they will be able to feed not only themselves, but also the people living outside Africa. For the time being, grain-growing is a problematic area of African agriculture.

As for conflicts, the situation returned to normal in a number of African countries. The civil war in Angola ended; the country is developing rapidly. Angola is rich in oil, diamonds and many other valuable raw materials. Many Portuguese citizens, who can not find a decent job in Portugal, tend to migrate to Angola, a former Portuguese colony. Many multinational companies eye Africa due to the wealth of its subsoil that has nearly everything, including rare earth metals. Many say that Africa is the continent of the future.

Uranium is mined mostly in Niger and in the Central African Republic. Most of rare earth metals are mined in the Democratic Republic of the Congo. For example, it goes about such minerals as coltan, without which a mobile device is impossible.

The minerals necessary for the production of steel for aircraft, submarines and so on are mined in Senegal. In general, Africa is extremely rich in natural resources, and there is a lot to discover.

China's trade turnover with African countries has grown to $100 billion from $10 billion some eight years ago. China has recently built a 175-kilometer railway between the capital of Nigeria, Abuja, and a neighboring city. The railway serves high-speed trains that develop the speed of 150 kilometers per hour. Russia should catch up with this train before it is too late. In Soviet times, Russia was best friends with Africa. Like other countries, Russia needs African resources, and Africa needs Russia too.