Clean as a Roman: The luxury of Roman baths

Cleanliness is the greatest good of modern civilization. We take a shower every day, enjoy baths with aromatic salts, but there are still many places in the world, where there are no showers whatsoever. What kind of a shower can one have in a reindeer skin tent, for example? In hot countries, water is luxury, so there is nothing that people can use to wash themselves with. In the past, hygiene was a huge problem. Yet, "white gloves" were all the rage even in ancient times. 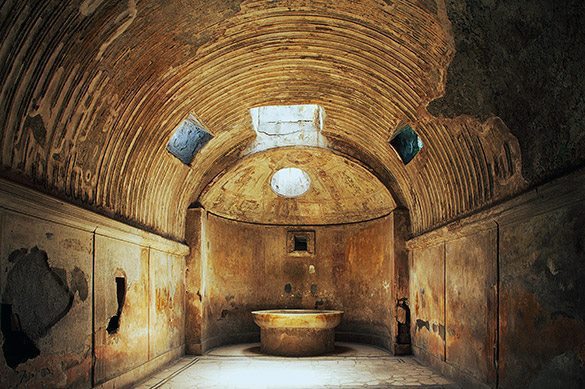 The Romans were probably the cleanest of all civilized nations. The Romans used a lot of water that they would deliver to their fountains and baths. Every resident of the million-strong imperial Rome would use from 200 to 9,000 liters of water. The Romans used that water for public baths. Why public? Eighty percent of the population of Rome lived in insula homes without any conveniences at all. There were neither hearths, nor even toilets there. People would go to public toilets to relieve themselves.

Starting from the 2nd century BC, the Romans became obsessed with cleanliness.

Everyone wanted to be clean, but only a few could afford that. At the beginning of a new era, public baths became exceptionally popular, as poor people's homes did not have bathrooms. Even if a poor man could have a bathroom in his house, how many jars of water would he have to bring to fill the bath?

Public baths were always at hand in Rome. In 33 BC, there were about 170 of them there, and their number increased to more than a thousand some 200 years later. Entrance to the bath and the use of hot water was either very cheap or free.

Many high-ranking Romans, who wanted to be elected for various positions, would often cover all the costs to maintain public baths in a hope that their generosity would bring them many votes. Emperors would do the same.

Public baths could be found in most Roman towns, even in smallest ones. For example, in the city of Volubilis (modern Morocco), two grand public baths were built that could house all inhabitants of the city at once.

The Romans would spend a lot of effort and energy to decorate the interior of their baths. The baths that were built on emperors' money were luxurious. For example, the baths of Emperor Caracalla were 225 by 114 meters large - that was the size of the main building only. Taking into consideration  all the walking paths, gardens and outbuildings, the whole bath complex covered the area of ​​about 10 hectares (roughly equivalent to 15 full-size hockey fields), and those were not the largest Roman baths.

A visitor of a Roman bath would immediately notice a beautifully decorated ceiling, walls finished with rare rocks, marble columns and floors covered with mosaic patterns of colored tiles - tesserae.

The building of the bath was crowned with a huge dome, under which there was a room for hot baths. There were also rooms for cold and warm baths. In all of those rooms, there were pools filled with hot, warm or cold water. The baths of Emperor Diocletian took 13 hectares of land and could house 3,000 people.

A visitor of the Roman bath could go on a real bath journey. At first, they could go to a dry heat bath (the Romans called it "the Spartan bath"). Today, we know this kind of bath as sauna.

After a sauna, one could dive into a pool of cold water. One could go outdoors to play games with friends.

When washing themselves, the Romans would first anoint their skin with oil before scrubbing it off with the help of a special scraper.

Roman baths could offer a variety of activities.  There was a library, a laundry, reading rooms, gardens, tailor shops, barber and manicure shops, lounges, wine shops, inns and a gymnasium for sports exercises. Most Romans would go to baths every day, sometimes several times a day.