Not that long ago, it was reported that the Ukrainian army was going to use former Soviet B-4 howitzers, a model from 1931. During WWII, these monstrous 203-mm guns were used to destroy bunkers. 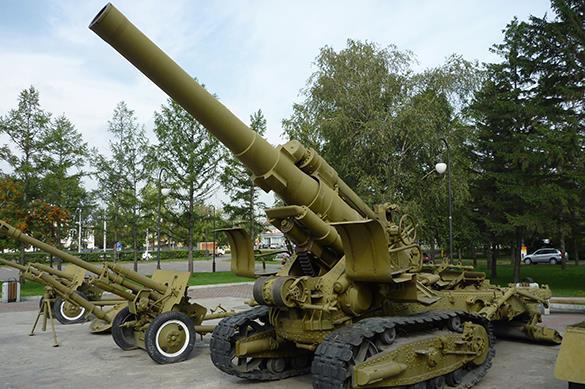 Let's start with the technical characteristics. The B-4 howitzer fires 100-kilo high-explosive shells at a distance of about 18 kilometers. The weapon can use concrete-piercing shells weighing up to 146 kg, making one shot in every two minutes. The machine weighs 15,800 kg in its combat version and 16,830 kg during transportation. The howitzer can be transported by tractors at the speed of up to 12-15 km/h on highways and up to 8 km/h in off-road conditions.

As many as 994 B-4 howitzers have been made since 1932. During the Great Patriotic War, Nazi Germans seized several of the howitzers and used them against Soviet troops. Now it appears that large caliber weapons are coming back.

Interestingly, the Turks used large battering rams that shot stone balls during the siege of Constantinople. In museums of Kazan, one can take a look at stone shots from 1552 the size of a watermelon.

The Japanese shelled Port Arthur from 280-mm mortars. The effectiveness of such weapons and their heavy shells was obvious before WWI. In preparation for it, Germans and Austrians built a group of large-caliber howitzers capable of destroying any type of enemy defenses. The crown of their efforts was the famous "Big Bertha" - a wheeled 420 mm howitzer that could fire concrete-piercing shells weighing about 900 kg at a distance of 14 km.

In tsarist Russia, there was a shortage of heavy guns. Russia was purchasing them from England and France: 203-mm and 234-mm Vickers howitzers and 280-mm Schneider mortars. The production of Russian 305-mm howitzers was established in 1915, but only 50 of those guns were produced.

Subsequently, however, the development of multiple launch rocket systems, the invention of nuclear missiles, guided and unguided missiles made large-caliber guns unnecessary. The battlefield mobility of large-caliber guns was found insufficient. Eventually, the production of weapons larger than 203 mm in caliber was discontinued.

Meanwhile, the experience of local conflicts showed that 100 -152-mm caliber guns cannot destroy modern concrete-cast buildings. They can destroy a balcony or make a hole in a wall, but even Tornado systems are not capable of destroying the whole building in one direct hit.

In our times, walls and floors are made of concrete, so modern buildings are virtually invulnerable to artillery systems. In the Donbass, people find safety in the basements of their concrete-made apartment buildings. Therefore, the use of old Soviet 203 mm caliber howitzers will only lead to more victims among civilians.