Spotlighting prevention, "Orange the World" kicks off global efforts to end violence against women and girls 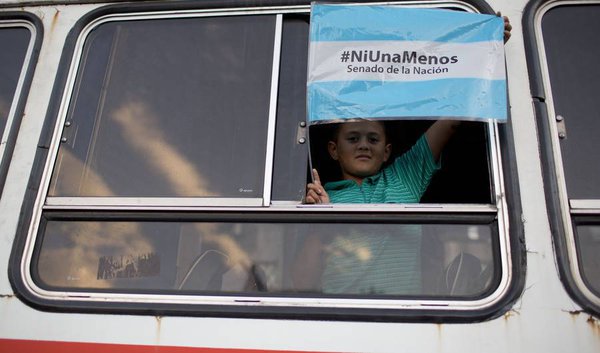 Over 450 'orange events' planned in more than 70 countries including lighting of the Niagara Falls, Council of Europe building, India Gate, and the ruins of Petra in Jordan

New York - From parades to soccer matches, school debates, and the lighting up of hundreds of iconic monuments, starting tomorrow a United Nations call to "Orange the World" will galvanize global action calling for an end to violence against women and girls, which affects one in three worldwide.

Coinciding with the 16 days of Activism, UN Women Executive Director Phumzile Mlambo-Ngcuka will undertake visits to three continents highlighting the urgent need for efforts to address the pandemic of violence at all levels-from global to the local-as well as across all sections of society, during high-profile events in Brazil, the Democratic Republic of Congo, Spain and Turkey.

The official commemoration of the International Day for the Elimination of Violence against Women on 25 November in New York will also see the launch of a landmark "UN Framework to Underpin Action to Prevent Violence against Women," jointly developed by a number of UN entities including UN Women, ILO, UNDP, UNESCO, UNFPA and WHO.

"Violence against women and girls remains one of the most serious - and the most tolerated - human rights violations. It is both a cause and a consequence of gender inequality and discrimination. Its continued presence is one of the clearest markers of societies out of balance and we are determined to change that", said UN Under- Secretary-General and UN Women Executive Director Ms. Phumzile Mlambo-Ngcuka. "The focus must now be on prevention, and although there is no single solution to such a complex problem, there is growing evidence of the range of actions that can stop violence before it happens. This comprehensive approach forms the core of the new framework developed by UN Women and our partner agencies."

There has been some progress over the last few decades; today 125 countries have laws against sexual harassment and 119 against domestic violence, but only 52 countries on marital rape. Despite efforts, violence against women and girls continues in every country, with women being beaten in their homes, harassed on the streets and bullied on the Internet. Preventing and ending violence means tackling its root cause, gender inequality. In 2014, the WHO called it a 'global epidemic' and a public health crisis, given its impact on one in three women experiencing physical or sexual violence at some point in her life-mostly by an intimate partner, and sometimes rising to affect a staggering 70 per cent of women in certain countries. Among all women who were the victims of homicide in 2012, nearly half died at the hands of a partner or family member. An estimated 133 million girls and women have experienced some form of female genital mutilation/cutting. Adult women account for almost half of all human trafficking victims detected globally.

With the recent adoption by world leaders of the Sustainable Development Goals (SDGs), a bold new global development agenda in September 2015, a critical juncture was reached in global recognition that violence against women and girls is a serious but preventable problem. The gender equality goal, Goal 5 of the SDGs, aims to end all forms of discrimination against women and girls. It recognizes violence against women as an obstacle to fully achieving the development agenda and will provide comprehensive indicators on what we should do to address that goal. It focuses also on the provision of services to address sexual and reproductive rights. At the historic Global Leaders' Meeting on Gender Equality and Women's Empowerment event on 27 September 2015, many of the  70 world leaders who took the stage named ending violence against women and girls as a priority for action, demonstrating not only the size and universality of the problem, but also the recognition of Heads of Government/State of this pandemic of violence being a major obstacle to fully achieving gender equality and the empowerment of women.

Globally, during the fortnight under the "Orange the world" call, over 450 events are planned in more than 70 countries throughout the 16 days. They include the lighting of major monuments, and numerous activities involving civil society such as dialogue sessions with faith-based leaders, film screenings, theatre and dance performances, rallies, marches, marathons and digital activism via social media platforms. Events will include the orange lighting of major landmarks including: the Niagara Falls (Canada/USA), the European Commission building (Belgium) and Council of Europe building (France), the Little Mermaid statue in Copenhagen (Denmark), the archeological ruins at Petra (Jordan), and the Palais de Justice (Democratic Republic of the Congo).

In Africa, among a series of powerful initiatives, South Africa will light its Nelson Mandela Bridge, while youth rallies will take place across Mozambique. Among many events in Central and South America, a film festival, themed as "Step it Up to End Violence against Women and Girls" will be held in Trinidad and Tobago. Quito, Ecuador, is hosting an Orange marathon and in Guatemala there will be a kite-flying procession, with messages promoting freedom from violence for women and girls. In the Asia-Pacific region, a collaboration with Humans of Pakistan will launch "16 women, 16 Stories", a powerful social media campaign using images and stories of local women. The UNiTE Festival, held in conjunction with the Lahore College Women University in Pakistan is expecting 10,000 girls from eight universities to attend. India will see the lighting of its India Gate as well as the display of ending violence against women messaging on panel boards in two high-traffic lines of the Delhi metro. Cambodia will host an 8.4-km orange marathon, while Timor-Leste is organizing an arts festival. In Europe, Albanian police officers will be patrolling the streets in orange and in the Arab States region, the Za'atari refugee camp in Jordan will be the venue for a walking women's marathon, among other activities.

Furthermore, as part of the mobilization by partners, influential media outlets and journalists have been urged to show personal commitment to the cause by symbolically using orange in their studios or in their attire, while urging their audiences to take action to end violence against women and girls.