Breaking new ground, she rides ahead

Sifting through the darkness, she measures the distances between the rails on Kazakhstan’s first subway system, the Almaty Metro. Lifting her heavy boots to keep her feet moving forward, she seeks the correct measurements on her latest engineering project, and tries to stay awake despite having worked in blackness for most of the day. Gulzhan Kokbayeva, age 27, is the only female engineer for the first subway system in Kazakhstan, a country known for housing the first space launch complex in the world, the Baikonur Cosmodrome. 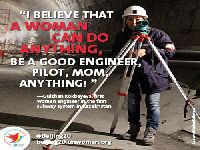 Perhaps living in close proximity to some of the greatest scientific minds of our time stimulated her interest in this challenging discipline, and her commitment to proving that women’s contributions to the economy can also come from science and math focused professions. Graduating with her Bachelor’s degree from the Department of Underground Construction at the prestigious Kazakhstan National Technical University just six years ago, was the easy part.

Becoming a female engineer in a male-dominated profession where very few women have ventured before, a profession that is also considered dangerous to one’s health, was no easy feat. Growing up in Ust-Kamenogorsk in Eastern Kazakhstan, her supportive parents provided her a foundation and she excelled in mathematics and sciences, and went on to score top marks in a nationally recognized school for gifted children. Kazakhstan passed the Law on State Guarantees of Equal Rights and Equal Opportunities for Men and Women in 2009, yet in reality it is still unusual for women to work as engineers, especially in perilous situations.

Never backing down from a challenge, Kokbayeva had to pass several stages of the selection process to become a main engineer, a position she worked hard to attain and which included an interview with the company’s top official the Director General.

Her choice of an unusual profession has brought both praise and criticism, but today she is well known for her physical, as well as emotional strength and self-control amongst her colleagues. Kokbayeva prides herself on maintaining her sense of self-esteem throughout all of the roadblocks put up in front of her in this demanding occupation.

Gaining respect and trust from male colleagues has meant a great deal to her, and she hopes that she has proved to other young women that they can do the same.

What do you think have been the most important factors that have helped in getting you where you are today?

The most important factor has been a great interest in my work and my desire to prove that I can work better than other male engineers. When I was interviewed for a job, there were two candidates for the same place – myself and another man. I was very happy when I was selected for this position.

What were some of the biggest obstacles to reaching where you are today?

There were no significant obstacles as my colleagues were very friendly with me and provided assistance when I needed it. [But] there was actually one problem with the uniforms: my uniform was too large and uncomfortable for me. The boots were very heavy and walking through the tunnel was difficult. The temperatures [in the tunnels] are cold in the winter and hot in the summer. There were also moments with my colleagues when my suggestions and answers were not taken seriously because they thought that I was too young and inexperienced, although my calculations were right. At staff meetings where the majority of participants were males, they used to use foul language, but after a while they learned to work with me.

Tell us a bit about your childhood, your ambitions and who inspired or influenced you to be who you are today?

As a child, I did not know exactly what I wanted to be, but I have always felt that I would be an engineer, or a woman with a profession that would traditionally be considered ‘male’. My parents have been my main inspiration. Today, tomorrow and always. My parents are not rich. They are very simple people. So I tried to be a good student and help them.

Being a woman, has that affected your road to where you are today, and how?

When you work in male society, you must be strong when dealing with stress, have good health, and try not to get hurt. How do you cope being one of the few women in your area of work, which is predominantly male? It is sometimes difficult for me amongst men, we are all real people, and sometimes the nerves come up. But nevertheless, I have learned to think and assess a situation calmly.

What is your main message for the younger generation? What should they learn from your experiences?

Since I am still learning, my advice to anyone would be to learn new things during your lifetime, not to stop. Go ahead and try to know more today than you did yesterday. Maybe it will be an electric guitar, foreign language courses or how to snowboard. Maybe one day you'll want to jump with a parachute. Don’t stop. Do it.

What is your message for other women or girls who may be inspired by your journey and achievements?

Try to protect your ‘core self’ and be strong. We should not be afraid that we did not get something that we wanted. I believe that a woman can do anything, be a good engineer, pilot, mom, anything!