UN Under-Secretary-General and Executive Director of UN Women, Phumzile Mlambo-Ngcuka, has spoken out against the barbaric violence perpetrated in Iraq against women and girls by the ISIL militant force. These outrages include rape, forced marriage, kidnapping and torture. 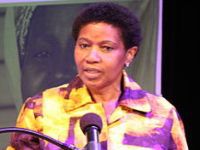 United Nations Under-Secretary-General and
Executive Director of UN Women
on the situation in Iraq, July 1 2014

UN Women is outraged by the deliberate targeting of women and girls in Iraq and reports of kidnapping, rape and forced marriage by militants of the Islamic State of Iraq and the Levant (ISIL) and other armed groups.

The targeting of women and girls is a grave violation of human rights, and is a common characteristic of conflicts around the world, with devastating and enduring consequences for women and girls, families and societies. UN Women is especially concerned by the risks to women's rights posed by growing extremism in various parts of the region and worldwide.

We are deeply concerned by recent reports that four women have committed suicide after being raped or forced to marry ISIL militants as well as reports of men committing suicide after being forced to watch their wives and daughters being raped. UN Women strongly condemns sexual and gender-based violence, and calls on all parties to address such reports and protect the rights of Iraqi women and girls.

Since the recent outbreak of violence, an estimated 1.2 million Iraqis have fled their homes amidst indiscriminate shelling of civilian areas. In such circumstances, women and girls are especially vulnerable to violence and exploitation. It is with regret that UN Women notes that the Iraqi parliament did not manage to start the political process of forming a new government this morning.  Only a political solution can help end this violence.

UN Women joins Secretary-General Ban Ki-moon and his Special Representative for Iraq, Nickolay Mladenov, in calling for the immediate formation of an inclusive government and in calling on all sides to cease targeting civilians and take immediate and urgent steps to ensure that vulnerable populations are protected from violence.

Phumzile Mlambo-Ngcuka was the highest-ranking woman to hold office in South Africa, being Deputy President from 2005 to 2008. She was a Member of the South African Parliament from 1994 to 2008, was Deputy Minister of Trade and Industry from 1996 to 1999, Minister of Arts, Culture, Science and Technology in 2004, and then Minister of Minerals and Energy from 1999 to 2005.