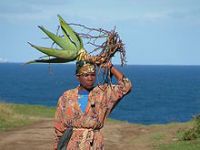 (Addis Ababa) At the African Union Summit, young women and girls have called on world leaders to build concrete solutions for the daily challenges they face, and focus attention on the next generation of Africa. Putting a spotlight on key priorities ranging from agriculture and conflict resolution to access to quality education and employment, lack of comprehensive sexual and reproductive health information and high levels of violence, the young women and girls called for strong action in a unanimous statement delivered to the continent's leaders.

Titled 'The Future Young Women and Girls Want', the statement urges African leaders to consider young peoples' priorities as they determine the African Union's common position for the future development agenda, after the Millennium Development Goals expire in 2015.

Strongly calling for a world where girls and young women's voices are heard, the statement called for a place at the decision-making table, and promised to hold leaders accountable to commitments made at national, regional and international levels.

The statement was delivered at an event bringing together 50 girls and young women from across Africa, in conversation with African leaders from governments, multilateral organizations, NGOs and the private sector.
"I was born in war, I grew up in war," said Livia Oliver, 23 from South Sudan. Ms. Oliver, who arrived in Addis Ababa after a five- day journey to leave the embattled country.  "Leaders and mediators must listen to us girls and young women - we can tell them the truth about conflict, and other issues facing Africa," she reiterated.

Responding to the statement, former President of Nigeria, Olusegun Obasanjo said: "When we talk about any adverse situation in Africa, women are directly affected. There are areas or places in Africa where because girls are girls, they are deprived the benefits of education. My sisters, I am with you, for the rights of women and particularly for the rights of our children for education and for empowerment."

On receiving the statement and in reference to the focus of discussions on agriculture and food security, UN Women Executive Director, Phumzile Mlambo-Ngcuka, said: "Agriculture for Africa offers an opportunity for economic prosperity, food security, poverty eradication, skills in science and technology and economic empowerment for women and girls. Women and girls can fight gender-based violence and take on a leadership role."

"This has been a conversation of accountability" said Nyaradzayi Gumbonzvanda, General Secretary of the World YWCA. "Girls and young women are the future of Africa, and can lead the continent's renaissance - but they must be given the opportunity to do so. We hope that the direct engagement of girls and young women with leaders will show their courage, determination and vision."

"The participation of girls and women will ensure greater progress as we strive to remove barriers and create opportunities for inclusive growth," said Vanessa Garcia-Brito, Senior Director for Partnerships and Strategic Communications at the Nike Foundation. "That's why we worked with 25 partners and 500 girls across 14 countries to develop the Girl Declaration, as a roadmap to success. Their hope and ours is that their voices will be heard and included in the post-2015 agenda."

The event was organized by the World YWCA, UN Women and the Nike Foundation, and took place in Addis Ababa, Ethiopia, to coincide with the African Union summit. Other leaders present were: Oda Gasinzigwa, Minister of Gender and Family Promotion for Rwanda; Amina Mohammed, Special Advisor to the UN Secretary-General on Post-2015 Development Planning; Geraldine Fraser-Moleketi, the Special Envoy on Gender at the African Development Bank; and Gertrude Mongella, the first President of the Pan-African Parliament and beacon of women's leadership in Africa.
________________________________________
UN Women is the UN organization dedicated to gender equality and the empowerment of women. A global champion for women and girls, UN Women was established to accelerate progress on meeting their needs worldwide.

The World Young Women's Christian Association (World YWCA) is a global network of women leading social and economic change in over 120 countries worldwide. The World YWCA advocates for peace, justice, human rights and care for the environment and has been at the forefront of raising the status of women for more than a century. The World YWCA develops women's leadership to find local solutions to the global inequalities women face. Each year, it reaches more than 25 million women and girls through work in over 20,000 communities. Through advocacy, training and development the World YWCA empowers women, including young women, to lead social change.

The Nike Foundation supports the girl effect: the unique potential of adolescent girls to end poverty for themselves and the world. Learn more at girleffect.org.