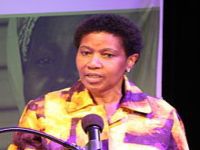 Launch of pioneering non-formal curriculum to end violence against women and girls - UN Women and World Association of Girl Guides and Girl Scouts put youth at the center of efforts.

(New York, 10 October) On the occasion of the International Day of the Girl Child, UN Women and the World Association of Girl Guides and Girl Scouts (WAGGGS) launch "Voices against Violence", a new non-formal education curriculum on ending violence against women and girls, putting young people at the heart of prevention efforts.

A first of its kind, the "Voices against Violence" is a co-educational curriculum designed for various age groups ranging from 5 to 25 years. It provides girls, boys, young women and young men with tools and expertise to understand the root causes of violence in their communities, to educate and involve their peers and communities to prevent such violence, and to learn about where to access support if they experience violence.  Working with youth organizations, UN partners and governments, UN Women and WAGGGS will roll out the curriculum to young people around the world. It will be adapted to national context, translated into local languages, and reach an estimated five million children and young people by 2020.

"We need to expand quality education that empowers girls, breaks gender stereotypes, and achieves real social change. Education can play a key role in ending violence against women and girls and partnerships are critical to move this forward," said Phumzile Mlambo-Ngcuka, Under-Secretary-General and UN Women Executive Director. "We are very excited about our partnership with the World Association of Girl Guides and Girl Scouts on this pioneering effort to prevent violence against women and girls worldwide," she added.

With 1 in 3 women and girls experiencing abuse in their lifetime, violence against women and girls is the most pervasive human rights violation. Gender-based violence starts early, and girls and young women are particularly vulnerable. Over 50 percent of sexual assaults are committed against girls under 16 years.  Globally, one in three girls are married before the age of 18, and one in nine before they turn 15.

"When we reached out to girls and young women around the world and asked what was important to them, they told us that they wanted to take a lead on tackling violence against girls and young women and that they wanted the World Association to work alongside them to do this", said Mary Mc Phail, Chief Executive of the World Association of Girl Guides and Girl Scouts. "As part of our Stop the Violence campaign, Voices against Violence is our first response; and with this programme we aim to go from a whisper of resistance to a shout of outrage, to stop the violence."

The new curriculum stems from the understanding that prevention should start early in life, when values and norms around gender equality are formed, by educating girls and boys about respectful relationships and gender equality. Effective prevention efforts entail a cross-generational approach, working within schools and communities, and providing young people the tools they need to challenge gender stereotypes, discrimination and violence.

Members of the Girl Guiding and Girl Scouting Movement can earn a 'badge' by completing a set of six age-appropriate sessions from the curriculum. Sessions can range from the youngest groups starting out with storytelling and games that prompt them to think about gender bias and stereotypes, while older age groups might organize poster competitions, visit and volunteer with local shelters, or develop local community-based campaigns and projects to address specific forms of violence against girls and women.

For more information on Voices against Violence, visit http://www.unwomen.org/en/what-we-do/ending-violence-against-women/prevention#WAGGGS