The film Sentimental Education, by Julio Bressane, was selected for the international competition of the Locarno Film Festival, from 7-17 August. 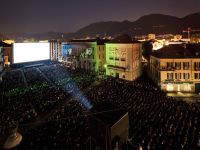 "I have closely followed the work of this Brazilian filmmaker", said Carlo Chatrian, new artistic director of the Festival of Locarno, right after the release of the Festival program, currently in Bern, the Swiss capital. "I saw his last films and we were in contact during his presence in Italy. Bressane has its own style of making movies and I think that the presence of Sentimental Education, in the competition, will be marked. I was pleased with the decision of Bressane to deliver his movie in Locarno, where he will have a world premiere."

A Brazilian short film, Tremor, by Ricardo Alves, competes in Leopards of Tomorrow. For Carlo Chatrian, the Brazilian and Latin American cinema live a good phase. This is not the situation in Africa, which only participates in Locarno with a coFrench-Algerian production, competing with a Brazilian short.

"I saw many African films but none of them had the level required by the Festival, I preferred to stay without African participation, even as Locarno is not a fair world, where each region of the world would have to be represented. The Algerians had two films that interested me, but they were left out for other reasons, "said Chatrian.

Latin American Presence
Also in the international competition is the long El Mudo, by Daniel and Diego Vega, a co-production of Peru and Mexico with France. Mexico competes in the show Filmmakers of the Present, with Los Insólitos Peces Gatos, by Claudia Sainte-Luce.

On the screen of 300 m2 in the Piazza Grande, the attraction of the summer nights of the Festival, will be shown the film Gloria, a favorite at the Berlin Festival, whose actress Paulina Garcia was awarded.
A new show, with the name Out of Competition, will display the Argentine-Brazilian coproduction O Que o Fogo me Trouxe, by Adrian Villar Rojas and the Chilean film Los Andes, by Joaquin Cociña and Cristobal León.

Portugal in Focus
Portuguese cinema is highlighted in Locarno. It participates in the  international competition with the film E Agora? Lembra-me, by Joaquim Pinto; there is a short in the Leopards of Tomorrow, by filmmaker Carlos Conceição, Versailles; and in the show Out of Competition, two shorts - Mahjong, by Rui Guerra da Mata and João Pedro Rodrigues, and O Corpo de Afonso, by João Pedro Rodrigues; also the long Se Eu Fosse Ladrão... Roubava, by Paulo Rocha, a Portuguese Film-maker with a homage in the show History of Cinema, where there will appear Os Verdes Anos and Mudar de Vida.