(New York, 5 March) In her message for International Women's Day, UN Women Executive Director Michelle Bachelet called on the international community to deliver on their commitments and to protect women's right to live free of violence. This year's International Women's Day coincides with the focus on ending violence against women at the UN Commission on the Status of Women - the annual gathering where countries agree on frameworks to address critical issues related to gender equality and women's rights. 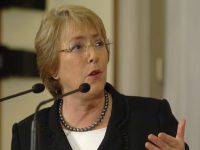 One of the greatest challenges of our times, violence against women and girls, affects up to seven in ten women worldwide. Occurring in multiple forms in all countries and settings, it impacts women and their communities, hampering development, and also costing countries billions of dollars annually in healthcare costs and lost productivity.

Reiterating that change is possible and happening in many parts of the world already, Ms. Bachelet called on all Governments to accelerate progress and concrete policy actions to end violence against women. "This year on International Women's Day, we say enough is enough.

Discrimination and violence against women and girls has no place in the 21st century. It is time for Governments to keep their promises and protect human rights in line with the international conventions and agreements that they signed onto. A promise is a promise," she said.

Change is possible and change is happening

Today on International Women's Day I join every individual who believes that change is possible. We are guided by a founding principle of the United Nations: the equal rights of men and women.

All around the world, our voices are rising, and silence and indifference are declining. Change is possible. And change is happening.

Change is happening when every country, for the first time in history, has women on their Olympic teams, as they did this past summer in London.

Change is happening when people worldwide declare solidarity with a Pakistani girl who was shot for championing education for all, a girl named Malala.

Change is happening when protests erupt across the globe with women and men, young and old, rising up and saying no to violence against women.

Today on International Women's Day I have a message that has two sides, one of hope and one of outrage.

I have hope because awareness and action are rising for women's rights. A belief is growing that enough is enough.

But I am outraged because women and girls continue to suffer high levels of discrimination, violence, and exclusion. They are routinely blamed and made to feel shame for the violence committed against them, and they too often search in vain for justice.

My message today is simple and straightforward. This year on International Women's Day, we say enough is enough. Discrimination and violence against women and girls has no place in the 21st century. It is time for Governments to keep their promises and protect human rights in line with the international conventions and agreements that they signed onto. A promise is a promise.

When we set up UN Women more than two years ago, we made ending violence against women one of our top priorities. We are fully aware that this requires changing attitudes and making headway towards equal rights, equal opportunities and equal participation, especially in decision-making.

As we observe this Day, Government representatives and activists are gathered at the United Nations for the largest international gathering on ending violence against women. At the 57th Commission on the Status of Women, Governments are negotiating a global roadmap of actions to prevent and end these widespread human rights violations.

Ten years ago, when nations came together in this forum on this same issue, they were unable to reach agreement. Today, we cannot allow disagreement and indecision to block progress for the world's women.

Yes, change is possible and change is happening. But given the atrocities committed each day, we must ask ourselves: Is change happening fast enough? How many more women and girls need to be violated? How many more families need to suffer?

Today and every day we say NO to discrimination and violence against women and girls.

NO to domestic violence and abuse.

NO to rape and sexual violence.

NO to human trafficking and sexual slavery.

NO to female genital mutilation.

NO to child brides and child marriage.

NO to murders committed in the name of honour or passion.

And we say YES to peace, human rights, justice and equality.

Today on International Women's Day and every day, let us go forward with courage, conviction and commitment, with the message that women's issues are global issues that deserve urgent priority. There can be no peace, no progress as long as women live under the fear of violence.