Lose a language, lose a culture

There are now only seven native speakers of the Nuu language, a clicking language spoken by the Khomani community in South Africa. As increasing numbers of languages disappear, humanity loses cultural heritage but not only... the loss of a language has far more dire consequences than the loss of a culture. 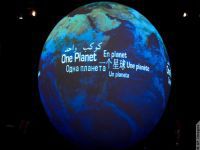 Ms. Ouma Aenki Kassie passed away on January 7 this year, leaving just seven speakers of her native Nuu language, a San language characterized by clicking (most consonants are clicks), spoken by the Khomani people. Most Khomani now speak Afrikaans or Nama as their primary language, rendering Nuu a language classified by UNESCO as "critically endangered".

There are now 2.473 languages in danger, according to UNESCO, which classifies the loss of a language as follows: "A lost language is not only lost cultural heritage, it is also lost traditional knowledge, such as precious knowledge about medicinal herbs or local species or environment. Thus, with each language that disappears, humanity is impoverished in manifold ways".

The situation of Nuu is similar to that of hundreds of others, and thousands to come: it is estimated that by the end of this century, half of the world's 6,000 languages will have disappeared and along with them, the secrets of folklore, poetry, history and human knowledge which could prove crucial for our survival.

It is a race against time for Nuu, however the language does have a powerful ally: UNESCO's language revitalization program found a sponsor in a Namibian linguist who documented Nuu in written form in 1998 and who began teaching the language to Khomani youth. He recorded elders speaking Nuu, documented this on CDs and collected stories told in Nuu.

He also conducted forty language camps for Khomani youth eager to learn the language of their ancestors and cultivated pride and interest in the language. The future of Nuu now rests upon the shoulders of these youngsters.

There are success stories. Among these is the Khasi language, spoken in the hills of Khasi and Jaintia in India's Meghalaya State, which has been removed from UNESCO's list of endangered languages and is now classified as "safe", being spoken by 900,000 people from at least three generations.

It was upgraded to "associate official language" in Meghalaya State in 2005 and is now used in primary and secondary education, radio and TV programmes and religious services.

UNESCO has five degrees of vitality:

Vulnerable - most children speak the language, but it may be restricted to certain domains (e.g., home)

Severely endangered - language is spoken by grandparents and older generations; while the parent generation may understand it, they do not speak it to children or among themselves

Critically endangered - the youngest speakers are grandparents and older, and they speak the language partially and infrequently

2013... Mankind is spending billions developing weapons to kill people, billions of biological formulas to spread diseases, billions of chemical weapons to burn the skin off men, women and children alike while turning a blind eye to his disappearing heritage. No wonder any self-respecting animal takes one look at a human being and sprints off in the opposite direction. They are at harmony with Mother Earth, we are not.

Author`s name Timothy Bancroft-Hinchey
*
18:54
Ukrainian soldier uses chainsaw and fire to release US howitzer from ice trap
18:30
Onet: Ukraine will lose in six months due to shell shortage
17:36
Russian troops defeat Ukrainian troops in Zaporizhzhia region
14:50
Number of foreign mercenaries in Ukraine continues growing
14:17
Russians buy more than 50 tons of gold in 2022
13:57
Russia will not talk to Ukraine. Russia will talk to the West
13:34
USA's plan to give 20 percent of Ukraine for peace hoax
12:51
Medvedev: Ukraine as a state to be devastated, go bankrupt and be turned into colony
19:57
Russia will use all of its military potential to counter Western arms supplies to Kyiv
18:34
Biden changing strategy on Ukraine to reach diplomatic solution with Russia
Drone with large air bomb on board explodes over Kaluga in western Russia