Examinations on the mummy of the Egyptian ruler shows a throat injury...New tests in Italy suggest that the Egyptian pharaoh Ramses III had his throat cut by conspirators. The conclusion came after an analysis of the first CT scans performed on the pharaoh's mummy. The CT scan revealed a wound 70mm wide at the throat, just below the larynx. According to scientists, this injury was probably made by a sharp blade and may have led to the immediate death of the sovereign. 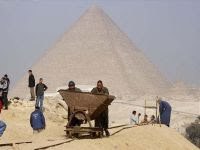 The CT scan revealed a wound 70mm wide at the throat, just below the larynx. According to scientists, this injury was probably made by a sharp blade and may have led to the immediate death of the sovereign.  "I have almost no doubt about the fact that Ramses III was killed by this cut in his throat," Zink told reporters. "The cut is so very deep and quite large, it really goes down almost down to the bone [spine]. It must have been a lethal injury."

"We were very surprised by what we found. Yet we are not sure that the cut killed him, but we believe so," said Albert Zink, paleopathologist at the EURAC Institute of Mummies and the Iceman in Bolzano, northern Italy.

"The cut could have been made by embalmers, but this is unlikely," he added.

The cause of death of the pharaoh has puzzled historians for centuries.

Ramses III, who ruled from about 1188 to 1155 BC, is described in ancient documents as the "Great God" and a military leader who defended Egypt, then the richest prize in the Mediterranean, from repeated invasion.

Ancient documents, including the Judicial Papyrus of Turin, in 1155 BC, suggest that members of the Pharaoh's harem tried to kill him as part of a coup led in his palace.

Some claim that the scammers were able to kill the pharaoh, while other reports at the time suggested that the pharaoh of the 20th dynasty survived the attack, at least for awhile.  He was about 65 when he died.

The Judicial Papyrus of Turin tells of four separate trials and lists of punishments for those involved in the coup. Among those involved were two of the known wives of the king.  One named Tiye, and then his son, Prince Pentawere, potential heir to the throne, were named.

According to the document, Pentawere, the only one of the many sons of Ramses III to revolt against him, was involved in the conspiracy. He had been found guilty at trial and committed suicide.

To try to find out more about the stories in the document, Albert Zink and his team examined the mummy of Ramses III and the remains of another unidentified body, known as the "Screaming Mummy" found in a royal tomb near the Valley of the Kings in Egypt. It is believed that this body is Pentawere.

Working outside the Egyptian Museum, where the bodies are currently located,  the team did CT scans and DNA testing on the mummies.

"Before, we didn't know much about the fate of Ramses III. The body was examined and had x-rays, but they did not notice any trauma. They had no access to CT scans," said Zink.

With Tomography, besides the gash just below the larynx, the scientists were able to see an amulet placed on the wound, an eye of Horus, probably inserted in place by the embalmers during mummification, for wound healing for passage into the afterlife.

The DNA tests, in turn, showed that the unidentified body of a young person, who was about 18 when he died, was from the family of Ramses III and probably his son, Pentawere.

The mummy of Prince Pentawere had strange marks on his neck, having died in strange circumstances

"With our genetic analysis we can actually prove that the two had a close relationship. They have the same Y chromosome and 50% of the genetic material is the same, something typical of a father-son relationship," said the scientist.

The researchers also found that the youth's body had pressed layers of skin and little unusual wrinkles around the neck, and that his chest was swollen. These changes in the mummy may have occurred after death, but also may indicate strangulation.

The body was not mummified as usual, it was covered with a goat skin, considered impure, which may represent a form of punishment.

It appeared he might have been forced to hang himself, a punishment deemed at the time as sufficient to purge one's sins for the afterlife, the researchers said.

History shows that the plotters failed to derail the line of succession. Ramses was succeeded by his chosen heir, another son called Amonhirkhopshef