EU: Dancing with the Devil

The European Union likes to say it pursues an ethical foreign policy, putting the moral high ground before any external policymaking. We saw that this is nonsense in the case of Libya. We also see that in the case of Morocco and Western Sahara, money matters more than morals. 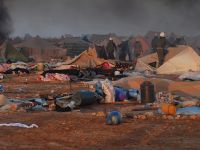 The Saharawi rights activists "Fish elsewhere" believe that the fishing stocks of Western Sahara belong to the people of Western Sahara, the Saharawi people, first and not to the invading power, Morocco. In its latest statement, the group claims that "The EU plans to sign in 2013 a new fisheries agreement with Morocco that is immoral. Again, the EU aims to fish in occupied Western Saharan waters, violating international law".

Once again, the European Union says one thing and does another. In this case, despite the fact that no country has recognised Morocco's illegal annexation of Western Sahara, the European Union is allegedly planning to pay over two billion Euro a year to the Moroccan government in order to guarantee fishing rights in the waters of Western Sahara - a territory which does not belong to Morocco under international law. Therefore why does the EU not do business directly with the rightful owners of the fisheries?

Moreover, according to the group, "Morocco still refuses to cooperate in the process of decolonization of Western Sahara, challenging more than 100 UN resolutions that insist on the right of the Saharawi people to self-determination. At the same time, the Moroccan authorities committed human rights violations against the Saharawi expressing their political views".

The United Nations Organization includes the management of natural resources among the terms for negotiation on the settlement of the issue of finding a solution to the conflict, in which case the signing of agreements unilaterally with Morocco countervenes the work of the UNO and undermines its efforts.

The Saharawi s claim that "Under international law, the exploitation of Western Sahara's natural resources can only be made in accordance with the wishes and interests of the Sahrawi".

Why, then, is the EU spending its taxpayers' money making agreements with an invading power, which disrespects human rights, without even asking the rightful owners of the stocks?

So much for an ethical and moral foreign policy.