Women's rights in Afghanistan: Some improvement

It is difficult to understand what NATO has been doing in Afghanistan since 2001 because there are some seven hundred women in prison, their crime being to have run away from domestic abuse. Rather than imprisoning those that abused them, their victims are held in deplorable conditions. So much for NATO and the rule of law... 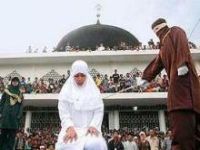 So much for NATO and the rule of law: the socially progressive government of Afghanistan which the USA totally destabilised with the Mujaheddin from the Pakistani Madrassah stood up for women's rights; NATO's darlings, which they are now fighting, destroyed them.

However there is some good news: UN Women has announced that the Afghan government has issued statements which affirm that "running away" is no longer to be considered a crime, and that "intent" to commit adultery is not enough. UN Women has quoted Minister of Justice Habibullah Ghalib, Minister of Women's Affairs Hussein Banoo Ghazanfar, and Deputy Interior Minister Mirza Mohammad Yarmand as saying that they all strongly condemn the wrongful imprisonment of women for "running away" from home.

UN Women explains: "Afghan women and girls have been arrested and prosecuted for 'running away', which is often used by prosecutors as evidence of the woman's intent to commit zina. This is in direct contradiction of Afghan law, under which 'running away' is not a crime, and where intent alone is not sufficient to prosecute a woman for zina (adultery, a crime under Sharia law).

"These arbitrary or selective applications of the law also violate fundamental rights and guarantees protected under international law, including the right to life, security of the person, freedom of movement, the right to health, and arbitrary or unlawful interference with privacy, family, or home."

This being the case, UN Women has called upon the Afghan government to ensure that all those women who are wrongly imprisoned are released immediately (this is thought to be around two thirds of the 700 women and girls held for "running away" with "intent" to commit adultery). Ingibjorg Gisladottir, Country Director, Afghanistan, for UN Women, states:

"The Government needs to ensure that law enforcement authorities do not arrest, detain and prosecute any further cases of 'running away'; guidance that clearly states that 'running away' is not a crime under Afghan law will serve to aid criminal law enforcement and end practices that discriminate against women", adding that "The Government should work to ensure the protection of these women and girls, including provision of appropriate support services, and bring all perpetrators of violence against women to justice."

The Law on Elimination of Violence against Women is supposed to have eliminated forced marriage and violence against women. When is it going to be implemented?

One wonders how much more advanced Afghanistan would be today if NATO had left it alone back in the 1970s with its socially progressive government.

Another fine NATO mess, meddling in the internal affairs of sovereign nations and taking side with terrorists as it creates monsters.