New documents on Katyn: Another portion of lies from US?

The National Archives of the USA have posted thousands of pages of documents "exposing" the real perpetrators of the tragedy in Katyn. The U.S. analysts believe that the main merit of the publication is the exposure of Roosevelt and Churchill, who hid the truth in favor of a coalition with Stalin. The Poles saw it as a confirmation of their favorite theory. 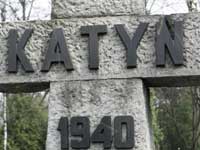 However, most likely, it is a political move designed to shift the blame, and hence the financial compensation, to Russia instead of Germany. Did the Duma acknowledged Stalin's blame too soon? Most of the published documents were already known to historians, only some of them - about a thousand pages - were made public for the first time. These pages are only a small part of the archives of the American commission of Madden of 1951-1952 investigating the "massacre in the Katyn forest." The entire archive of the commission on the case contains nine volumes.

The publication of documents on Katyn in the U.S. has clear political overtones. The Poles remember the recent Polish-American incident caused by a slip of Barack Obama about "Polish death camps" during World War II. Poland believes that by this publication the U.S. president "rehabilitated" himself in the eyes of the Poles. The US is not particularly concerned about its image, especially in the active phase of the election campaign. The American voters know about Katyn as much as the Polish people know about the uprising of black people in Birmingham. However, the U.S. State Department might have well provided financial help to Germany that may soon have to deal with the claims of Greece.

According to Polish newspaper Rzeczpospolita, "Polish historians have evidence that President Franklin Roosevelt knew about the non-participation of the Germans in the Katyn events, although publicly defended the opposite point of view." Polish historian and political scientist Vojtech Matersky in an interview with Gazeta Wyborcza said: "These documents show that the U.S. is fully aware that Katyn was the product not of Germany, but the NKVD."

Matersky insists that this is the way out of the moral hangover after the initial omission from the time of President Franklin D. Roosevelt in the 1940s. The most important proof of the blame of the NKVD is allegedly contained in the testimony of two American prisoners of war - Captain Donald Stewart and Lt. Col. John G. Van Vliet, who in 1943 passed an "encrypted message" to the government about the truth about Katyn. The "truth" confirms the German version - the murder of Polish soldiers was committed even before the entry of the German troops into Smolensk region.

However, the published documents do not contain the aforesaid encryption of Stewart and Van Vliet. The personal report of Colonel Van Vliet Madden's Commission 1952 is not preserved either. It was recorded later (from memory) by the chairman of the committee.

Therefore, the publication of the American documents is unlikely to give a legal basis for a positive solution to the Poles of the Katyn crime in the Strasbourg Court of Human Rights (ECHR). In October of 2011 they filed a claim of inadequate investigation by Russia of the events that took place 70 years ago.

The essence of the claims is the following.

According to declassified memorandum of the chairman of the KGB Alexander Shelepin, NKVD, by the order of the Central Committee of the CPSU (B) of 5 March 1940, shot a total of 22 thousand Polish prisoners of war in Smolensk and Kalinin regions, as well as Ukraine and Belarus. The investigation started in the 1990s in Russia was terminated in 2004, pursuant to paragraph 4 of Part 1 of Article 24 of the Criminal Procedure Code (death of the guilty).

In this regard, the ECHR in 2011 accepted the complaint of 15 Polish citizens on Article 2 (right to life) and Article 3 (prohibition of torture and inhuman and degrading treatment) of the "European Convention on Human Rights" on the grounds that the investigation into the shooting of Poles was conducted inappropriately.

According to a well-known lawyer Dmitri Agranovsky, the documents published by the Americans are falsified. He stated that the documents did not contain anything new. He said that the Polish side wanted the money, but could not get it from the Germans, so all the energy was diverted to Russia. He is convinced that the U.S. that is still feared of the Soviet Union has a motive and that it will go to great lengths to blame Katyn on the Soviet Union. With this "declassification" the Americans, he said, once again reminded Russia that it should not refuse to recognize the Katyn massacre.

Indeed, even without the current publication, it was known that the government of the Nazi Germany organized trips of citizens of neutral countries to Katyn graves open in the spring of 1943. It turned out that the American prisoners of war participated as well. The U.S. government then took a note of them, but could not trust them completely, because it understood the meaning of the German provocations in Katyn. Therefore, the noise initiated in the West today about the fact that Roosevelt knew the truth, but to please Stalin "deceived the entire world" is just a cover for the enactment of a different combination.

As soon as the Patriarch of Moscow and All Russia Kirill and head of the Polish bishops Denominations Jozef Michalik signed and announced the message of reconciliation between the peoples of Poland and Russia, the Americans "declassified" their materials on the Katyn case. Maybe we need to look ahead and think about the prospects of the U.S. missile defense in Europe, where Poland was the main ally of the United States. Is it time to cool down Donald Tusk, who suddenly decided to wait with the decision until after the U.S. presidential election?

And one more question. Were the documents from the so-called "special folder number 1" made public in 2010 by Rosarchiv falsified as well? On the basis of this folder the State Duma in a statement acknowledged that the execution of Polish officers was committed on the direct orders of Stalin and other Soviet leaders.

However, some experts, such as Dmitry Dobrov, say the documents from this folder, including the already mentioned note of Shelepin, were falsified, since the witnesses (Mikhail Gorbachev, Alexander Yakovlev, and Dmitry Volkogonov) describe three variants of its origin.

But if we acknowledge our guilt, we should calculate the effect of such confessions. Image is not everything, and, by careful "declassification" in the U.S., it is clear that the Americans know it better than Russians.