Congratulations to William Hague, Hillary Clinton and the sickening little wannabe Napoleons who rule France these days, desperately trying to claw back some international prestige after the French language has dived down the plughole into the sewer. Let us compare Gaddafi's Libya with FUKUS Libya. 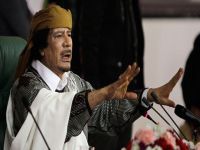 Black Libyans lived together with white Libyans, around 700 different peoples and tribes and sub-tribes cohabited the area formerly called Tripolitania, Cyrenaica and Fezzan in peace, living in the people's communes reporting their needs through the people's councils to central Government which distributed wealth and provided for their requirements. This was called the Jamahiriya system.

Gaddafi planned many African initiatives which freed 700 million people from the yoke of debt to western institutions.

And what have the FUKUS countries given Libya and Africa in return?

A growing AQIM (Al Qaeda in Maghreb), ethnic cleansing against black Libyans, hatred among tribes and sub-tribes, a Balkanization of Libya, women's rights spiralling into nothing, women being raped, women having their breasts sliced off in the street, girls being sexually abused, boys impaled with stakes, terrorist gangs running amok in towns and villages.

Al Qaeda in control of parts of Libya - congratulations, because Gaddafi was the first international politician to put an arrest warrant out for this group. A growing number of explosions and car bomb attacks have been attributed to Al Qaeda. Gangs of thieves, murderers and psychopaths who used the "Revolution" to escape from prison are marauding around the country doing as they please. Kidnappings and theft, robbery, rape, murder and torture are now rife.

Gaddafi's humanitarian and developmental aid and projects have ceased.

And William Hague, Hillary Clinton and the sickening little Napoleons will say the Libyans are better off? Ah right, they're "free". Ha! They aren't even free to walk down the road to buy a loaf of bread. And hey presto! Africa is back in the grip of western institutions again.

Nice one, NATO, nice one... Chuckle smugly and look over your shoulders. Karma time's a-coming!