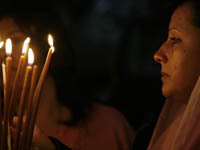 Envy is at once a passion and one of the capital sins. As a passion it consists in a sort of deep sadness experienced in the sensitive part of our nature because of the good we see in others. This sensitive impression often produces a feeling of anguish. As a capital sin envy refers to the tendency to be saddened by another's good as if that good constituted an affront to our superiority. Often it coincides with a desire of seeing the person deprived of the particular good that offends us as well as the immoderate desire to acquire that good for ourself, even unjustly. A manifestation of envy today is moral relativism, which denies that there are any objective moral norms. This denial is intended to subvert the objective status of the goodness of others.

Envy is contrary to the tenth commandment: "You shall not covet your neighbor's goods". When the prophet Nathan wanted to spur King David to repentance, he told him the story about the poor man who had only one ewe lamb that he treated like his own daughter and the rich man who, despite the great number of his flocks, envied the poor man and ended by stealing his lamb (2 Sam., 12: 1-4). The most detailed explanation and condemnation of envy is given by Christ in His parable of the laborers in the vineyard ( Mt. 20:1-16). The laborers who worked all day supposed that, at the end of the day, they would receive more wages than those "latecomers who put in just one hours work". When they were not payed more they complained prompting the owner's rebuke: "Are you envious because I am generous?"

The vice of envy proceeds from pride, vanity, and distorted self-love which can bear neither anything superior nor any rival. When we lack the proper humility and become convinced of our own superiority, we become saddened to see others better gifted than we are or, with no greater gifts than ours, succeed better than we do. The object of envy is chiefly some brilliant quality or virtue.

The fault of envy manifests itself in the pain we experience upon hearing the praises of others, and in the subsequent attempt we make to depreciate this good opinion by criticizing those that are thus commended.

Envy is often confused with jealousy. They differ in the fact that jealousy consists in an excessive love of one's own good accompanied by the fear of being deprived of it by others. A top ranked student, for example, upon noticing the progress of another student, may become jealous of him because he fears the latter will take away his rank. Jealousy often abounds among professionals, among writers, and even among priests. The essential difference between envy and jealousy is this: we are envious of another's good, and jealous of our own.

There is also a difference between envy and emulation, the latter being a praiseworthy sentiment, urging us to imitate, to equal, and, if possible, to surpass the good qualities and virtues of others, but always by means that are fair.

In itself, envy is by nature a mortal sin, because it is directly opposed to the virtue of charity which requires us to rejoice in the good fortune of others. The more important the natural or supernatural good we envy, the graver is our sin. This is true only when the envious impulses are fully consented to; however, often they are mere emotional impressions, or at most, feelings in which there is but little reflection and will. These latter constitute only a venial fault.

Merely to grieve that one does not have something that another has is not envy; neither is he envious who is depressed because another, by reason of his possession, e.g., an office, is in a position to harm him; nor is it envy if there is sadness because a neighbor has something he does not deserve. Finally, it is not envy but hatred to begrudge our neighbor his possessions, not because these are looked upon as a diminution of our own good, but simply because we do not want him to prosper.

Envy can be very culpable in its effects when: 1) it disturbs our peace of soul, 2) it stirs within us sentiments of hatred causing us to speak ill of others, to blacken their character, to wish them evil, 3) it tends to sow discord not only between strangers but between members of the same family, 4) it urges men on to the immoderate quest for riches and honors. In order to surpass others one may, for example, engage in overtaxing work of a more or less questionable nature that involves sins against loyalty and justice.

There are both negative and positive remedies for envy. Some negative remedies include 1) scorning the very first intimations of envy and jealousy that arise in our heart. When such passions have already taken our heart by surprise it is necessary says St. Francis de Sales "to drive them away speedily than enter into parley; for, if we give them ever so little leisure, they will become mistress of the place, like the serpent, who easily draws in his whole body where he can once get in his head...You must at the first alarm speedily muster your forces; not violently, not tumultuously, but mildly, and yet seriously" (Introduction to the Devout Life, P.III, C.VIII). 2) Another remedy is distracting the mind by occupying ourselves with something else. When calmness ensues we should then strive to bear in mind that the good qualities of our neighbor do not lessen ours, but are rather a stimulus to imitation.

Among the positive means there are two that are especially important. The first is drawn from the fact that we are members of the mystical body, the head of which is Christ, and that the good qualities and the attainment of one member redound to all the others. Instead of being saddened by the superiority of others we should rejoice with St. Paul (Rom. 12: 15-16) since their superiority contributes not only to the common good but to our own particular welfare. The second means consists in cultivating that noble and Christian sentiment of emulation, which prompts us to imitate and even surpass the virtues of our neighbor, with the help of God's grace.

Here we must keep in mind that for emulation to be good and remain free from envy it must be 1) right in its object, i.e. it must bear not on the successes, but on the virtues of others so as to imitate them. 2) It must be worthy in its motives, seeking not to vanquish others, humiliate them, bring them under subjection, but to makes us better in order that God may receive greater honor and the Church greater prestige. 3) It must be fair in the means it employs to attain its end; not intrigue, not subterfuge nor any other unlawful proceeding; but effort, labor, the right use of divine gifts.

Emulation is, an effective remedy against envy because it causes no one harm and is, at the same time, an excellent stimulus. For to consider as our models the best among us in order to follow in their steps or to go even further than they do, is in reality to acknowledge our own imperfections and to seek to remedy them by profiting by the example of those around us. It is to imitate St. Paul, who invited his disciples to be imitators of himself as he was of Christ (1 Cor., 11: 1, Hebr., 10: 24); it is to follow the same Apostle's advice to the Christians: "Let us consider one another to provoke unto charity and to good works" (St. Gregory, Moral., 1. 5, c. 45); it is to enter into the spirit of the Church, which, in proposing to us the saints for our imitation, provokes us to a high and hallowed emulation. Thus, what would have been envy, proves to be an occasion for the cultivation of virtue.